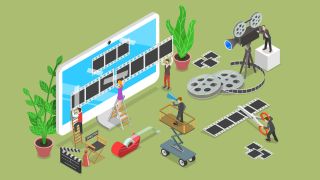 Shooting video is one thing, but editing into shape is something entirely different. Fortunately there is plenty of free video editing software out there to help you get things cut into shape.

Capturing video has never been easier. Most people have camera phones that can record Full HD content, and some, like the Sony Xperia 1 can record up to 4K HDR video too.

DSLR and mirrorless users are also able to capture pro-grade footage, taking advantage of stunning depth from premium lenses, not to mention advancements in low-light shooting, demonstrated by cameras like the Sony A7 III.

But what to do with all this video? Often, it sits on your camera or phone, but with a bit of time, tech and TLC, it could be turned it into something epic.

If you’re computer- or smartphone-literate, there are a lot of easy to use video editors out there, so you can sequence your clips and create a narrative without requiring much in the way of technical know-how. If you have an iPhone or iPad, you can even do this with their native video editing software.

Alternatively, if you’re tuned into tech and love tinkering, there are a range of free professional editing apps like DaVinci Resolve and Light Works, which are so capable that they're used for feature films.

With so many free services, and plenty of tutorials online to help ease you into video editing, at any level, learning how to piece together everything from family holiday video montages through to short or long films has never been easier.

DaVinci Resolve started out as a color-grading tool, and has since become an industry standard editor that many pros prefer over paid-for alternatives. With a familiar UI consisting of a timeline, monitor window, and a media pool, anyone coming from Premiere Pro should feel right at home – and anyone who’s thinking about Premiere Pro but doesn’t want to stump up the cash will be well served with DaVinci.

Fusion visual effects and Fairlight audio are also free as part of the Resolve package, which are the equivalents of After Effects and Audition from Adobe. The combination of these means your projects can incorporate footage, perfectly tuned audio and custom-made animated effects – and all without costing you a penny when it comes to software. As an added bonus, if you pick up an excellent Blackmagic Pocket Cinema Camera 4K you can get a free upgrade to DaVinci Resolve Studio, lifting the lid on collaborative edits and HDR video as well.

Hitfilm Express has a virtually identical core UI to Premiere Pro, which, considering it’s free, is mightily impressive. This includes options to reorient your workspace to suit your needs, and pull up transition effects. Once you get to grips with the core interface, you can bolster the experience by paying for additional tools, like a color-editing panel, and there’s even a 360-degree video editing tool – but at the heart is a solid video editor at no extra charge.

With preset export settings going up to 4K at 100fps, Hitfilm Express is a great choice for quality output. There are also plenty of tutorials and YouTube videos available through the app itself, making this a great choice for anyone who wants to spend hours immersed in a new medium. A common theme in feedback from users of Hitfilm is that it requires a lot of processing power; and in addition to needing a powerful computer, you might also need a social media account, as the signup process is a touch long-winded, requiring you share a social post in order to gain access to the free download. If all that sounds okay to you, though, Hitfilm comes highly recommended.

The best for wannabe filmmakers

Platform: Windows/Mac/Linux | Ease of use: Intermediate | 4K support: No

As with DaVinci Resolve, Lightworks has both free and paid options. While the core editing features are similar across both, the export options in the free version are heavily limited. Specifically, videos can only be exported at up to 720p, and formats are locked to MP4.

If you’re thinking about going professional as a video editor though, Lightworks could still be your best option while you learn the art. Used in blockbusters like Pulp Fiction and The Wolf of Wall Street, Lightworks offers a level of granular control over your edit that others can’t. While it's therefore not the easiest piece of software in this selection to get your head around, it’s still a great, free way of getting to grips with working across timelines and manipulating comprehensive color-correction tools.

The obvious choice for iPhone and Mac owners

iMovie is all about polish, without the need for expertise. In true Apple style there’s a marked level of finesse to the software, which is available for iPhones, Macs and MacBooks; it’s both a beautiful experience for novices, and while at times limiting, enjoyable to use for pros. The app features plenty of high-quality typefaces for titles available across operating systems, as well as filters and transitions, not to mention a few soundtracks too – and given how tightly Apple’s photos app integrates across smartphone and computer, getting your personal videos into the app will be a breeze.

iMovie’s ability to output at up to 4K resolution also ensures your exports look as good as they can, making iMovie the ideal choice for Apple hardware owners who want an easy way to create glossy videos. With its cookie-cutter features there’s a good chance iMovie might frustrate more seasoned editors who want total control or nothing, but for anyone else it should be a dream to use.

The best option for middleweight editors

Shotcut is a really powerful, customisable video editor that, if mastered, could be a perfect tool for YouTubers who want to make fun, wacky videos. This is the app to use if you want to try swapping out backgrounds, while simultaneously sharpening your editing skills. The default interface features a timeline and preview window; however, it’s modular, so can be customised heavily to suit your needs, with everything from an audio level window to a media manager available. When it comes to functionality, in addition to covering the basics, the recently added keyframes feature adds a nice amount of versatility to the editing experience.

Delivering a great balance of basic and premium, Shotcut even supports advanced features like green screen edits with Chromakey and audio scrubbing, so you can get a preview of an audio track as you drag your pointer across the timeline.

Platform: Windows/Mac/Linux | Ease of use: Intermediate | 4K support: No

Blender isn’t strictly a video-editing application – instead, it’s a powerful, free 3D animation tool that other services like Openshot tie into for their own 3D features. Unlike OpenShot, however, Blender isn’t particularly user-friendly. If you can handle its steep learning curve, however, anyone comfortable in the Blender UI can benefit from its in-app video editor. This feature packs comprehensive controls that could keep animation and editing in one place for efficient project management. It comes complete with a timeline and preview window, color-editing tools and even camera tracking, and while it may take some getting used to, what you put into working within Blender will have a major bearing on what you get out of it.

Platform: Android/iOS | Ease of use: Beginner | 4K support: No

Filmora Go is a powerful, free video-editing tool for Android that's perfect when you're out and about and in a pinch. With a simplified touch interface and a host of features within, it allows you to import your video clips, trim them, add transitions between them, overlay titles and apply themes.

Rather than use pro video editing language, to export your film you simply hit the Save button, making it incredibly user-friendly. Once done, you can export your project to Facebook, Vimeo, or YouTube directly, or save it to your device. While it's able to ingest 4K content from phones like the Honor 20 Pro, output options are limited to 720p, and if you’re using the app on a screen with a super-wide display it won’t take advantage of that width, instead applying heavy letterboxing. If you can deal with those drawbacks though, it’s an excellent tool.

If you want granular control of your edit, OpenShot probably isn’t for you. If, however, you’re looking for a relatively powerful, free experience that’s easier to use than other options, OpenShot’s interface spoon-feeds novices with visual previews of transitions, and features simplified timelines. A level above simple re-sequencing, OpenShot won’t give you color-grading tools, and for elements like animated titles  you'll have to download another piece of free software, Blender, which is featured above. Having said that, it’s the perfect tool for managing simple projects, rearranging sequences, and getting to grips with basic effects.

What makes it stand out, though – even compared to advanced editing tools – is its support for 4K video exports, making it an awesome, free tool for anyone who’s got a flagship phone like a Huawei P30 Pro or iPhone XS, and wants to get creative with their UHD footage.

Best monitors for photographers in 2019