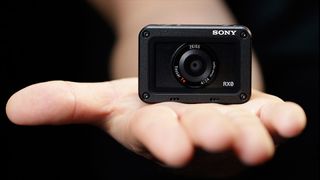 If you’re looking for a good price on the Sony RX0, you’re in the right place. Our team has searched all the major retailers to bring you today’s very best Sony RX0 camera deals, so you can be sure you're getting the best value possible for your hard-earned cash. There are some good reductions to be found now that the Sony RX0 Mark II has gone on sale… But do check below to see what Sony RX0 II deals are around!

Action photography fans have a diminutive new ally in this ultra-portable, ultra-compact shockproof and waterproof camera. It's somewhat pricey and not explicitly marketed as an action camera as such, but could the Sony RX0 dislodge GoPro from its action camera perch?

Capable of withstanding drops from two metres high and crushproof to 200kgf, the 15.3MP RX0 is certainly robust. It's also waterproof to depths of up to 10m without additional housing, or 100m with MPK-HSR1 housing, and it provides users with the ability to take quality images said to match those from Sony’s RX range of cameras. This is partly thanks to that 1in sensor, but also the ZEISS-branded 24mm f/4 (equiv) fixed lens and BIONZ X image processor. So, a top-end imaging pipeline in places where other cameras fear to tread.

For users who want to shoot super-slow motion footage, the RX0’s High Frame Rate mode can shoot close to a whopping 1,000fps You’ll need to bear in mind the minimum focus distance of 50cm, however.

As regards to its appeal to videographers, the RX0 can capture 4K footage with the option of clean HDMI output. Multiple RX0s can be linked together in various ways, with Sony's FA-WRC1M wireless radio commander able to trigger up to 15 RX0s simultaneously. Alternatively, Sony’s PlayMemories app allows for up to five of the devices to be connected and controlled wirelessly from any paired device.

Other features include a built-in universal microphone port, plus Wi-Fi and Bluetooth connectivity options, though we’re missing built-in optical image stabilisation. We guess its manufacturer reckons the device will be used with the aid of a gimbal or similar support in the main.

So, there's quite a bit of creative opportunity here, with Sony able to cram a lot of impressive tech into a small chassis, one that measures just 59 x 40.5 x 29.8mm. This includes a 1.5in screen – sadly not a touch screen – around the back. Naturally, extra housing aside, there's a host of optional accessories available, including cable and lens protectors, if you want to go the whole hog.

Some might argue that a wide angle of 24mm isn't quite enough for the fully immersive experience, and that a screen resolution of 230k dots could be improved. It can also be a tad tricky finding your way around menu settings – for which both a larger screen and a touch screen at that may have aided usability. All being said though, this is a specialist tool that will find an equally specialist audience. If you want a general one-size-fits-all image-capture device then you’ll probably be looking elsewhere.

The key addition of the RX0 II is the fold-up LCD screen... this is specifically designed for vloggers (and selfie-lovers) allowing you to frame yourself up so you can be the star of your own video. Another improvement is that Mark II model can shoot 4K video, without the need for an external recorder.