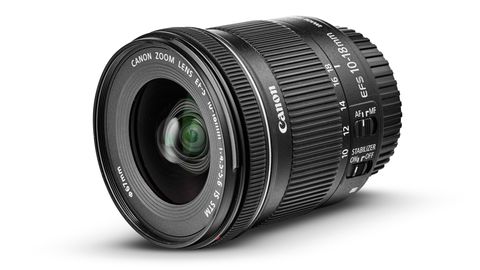 Blending a lightweight build with an affordable price and surprisingly solid optical performance, the Canon EF-S 10-18mm f/4.5-5.6 IS STM ticks a lot of boxes for Canon users and makes for a great option for a step up from a kit lens. Explore wide-angle perspectives without making your kit bag or your wallet too light – the EF-S 10-18mm f/4.5-5.6 IS STM is a great choice. Just make sure you pick up the lens hood as well.

Carrying around additional lenses for your DSLR is no fun when they’re quite hefty. If you’re the type to travel light, you’ll want to consider this relatively new offering from Canon – the EF-S 10-18mm f/4.5-5.6 IS STM. It’s refreshingly small for a wide-angle zoom and at 240g it tips the scales at less than half the weight of many of its rivals in similar focal ranges, most notably from the likes of Sigma. Its 67mm filter thread is much smaller than usual, further reducing the weight and expense of the gear you need to tote around with it.

Part of this lens’s weight loss is due to it having a plastic rather than metal mounting plate, but despite this, its build quality feels robust. Typical of many recent Canon lenses, it features an STM (Stepping Motor) autofocus system which, in this case, is fast for stills, smooth for video capture and almost silent in operation. The usual electronically coupled focus ring enables manual override of autofocus but, as is also typical of STM lenses, there’s no focus distance scale.

Less than half the price of Canon’s older 10-22mm wide zoom for APS-C cameras, this new lens adds the bonus of image stabilisation. As usual with non L-series Canon lenses, you need to buy the lens hood separately; the EW-73C costs around £25/$25. We’d say this is a pretty essential buy for daytime shooting, ensuring that your shots aren’t ruined by stray light and reflections.

It’s not lightweight in terms of build, and happily that proves to be just as true for the EF-S 10-18mm f/4.5-5.6 IS STM in terms of performance. This lens matched or beat Canon’s pricier 10-22mm lens for sharpness in our tests, throughout its zoom and aperture ranges. Colour fringing is less obvious but barrel distortion is a bit worse at the short end of the zoom range. But, it’s easy to correct during editing or when using the automatic in-camera fix that’s available in recent Canon bodies.

Elsewhere, you’ve got Super Spectra coatings applied to the lens elements, reducing ghosting and flare and ensuring maximum light transmission. It’s an all-around excellent lens for passing the baton from a kit lens, which would typically have a wide focal length of 18mm, and in that sense it makes for a great second lens for the Canon user, especially given the nice, wallet-friendly price.