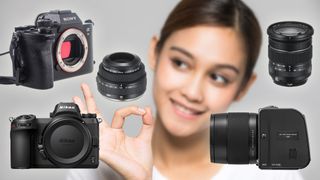 While the week's news was predominantly steamrolled by Amazon Prime Day, which turned into a 48-hour frenzy of photography spending, it still managed to be a massively eventful one.

Sony, in its infinite wisdom, decided that one of the biggest consumer events on the calendar would be the ideal time to announce its latest camera – a full-frame monster that throws the notion of medium format into question.

Which prompted Hasselblad to fire back with its "On the moon since 1969" limited edition camera, reminding everybody that medium format has always been where the big boys have played.

Fujifilm also announced a pair of lenses, as well as the establishment of a London-based photography center, and Nikon looks like it will be following Sony's lead with an enormous high-res camera of its own…

The 61MP Sony A7R IV easily beats all of its full frame rivals for resolution, including the once-mighty Canon EOS 5DS, the Panasonic Lumix S1R and Nikon Z7. It even outclasses medium format cameras like the Hasselblad X1D II 50C and the Fujifilm GFX 50R.

It's also capable of using Pixel Shift Multi Shooting to produce ultra-high-resolution 240MP images (which are reportedly almost 1GB in file size), possesses 15 stops of dynamic range, and can shoot in bursts of 10 frames per second…

While Sony dropped huge bombshell on the photographic industry, it appears that Nikon is preparing to return fire with a 61-megapixel warhead of its own, following reports that the manufacturer is planning a high-resolution Nikon Z8.

Not only that, but it is building its 61MP camera around the very same sensor that's inside the Sony A7R IV; Nikon has agreed to purchase the same full-frame back-illuminated Exmor R CMOS sensor, the Sony IMX455.

That's according to a series of reports from Nikon Rumors, which may have seemed pie in the sky before this week but now make a whole lot of sense in the wake of Sony's announcement…

Panasonic is developing a Time of Flight camera sensor that would deliver "a new PERFECT autofocus system", superior to even the best hybrid contrast and phase detect systems, according to a new report.

While the story states that the new technology is being developed for Panasonic's line of Micro Four Thirds cameras, it would stand to reason that the manufacturer ultimately plans to bring it to the S1 series of full-frame bodies.

"Panasonic is working to on [sic] their ToF sensor from the Vivo Nex Dual phone to implement it on a new AF system in their MFT line! But I am not sure when it will go live (gh6/7/8)"…

Fujifilm has been busy this week, too, with a trio of big announcements of its own.

First came news of the Fujifilm Concept Experience Centre, due to open winter 2019 in the middle of London’s Covent Garden. Set over three floors, this world-first installation will showcase all the company’s photography and imaging brands (for both picture making and taking).

That was followed by the official announcement of the much anticipated Fujinon GF 50mm f/3.5 R LM WR – the smallest and lightest lens in the GF range, which pairs perfectly with the Fujifilm GFX 50R to make a mobile medium format street camera.

As part of its ongoing celebration of 50 years since the original moon landings, Hasselblad has announced a lunar-themed limited edition that pays tribute the first ever camera on the moon: the Hasselblad 907X Special Edition.

Comprising the 907X camera body and the CFV II 50C digital back, the Hasselblad 907X Special Edition comes in matte black and features a commemorative plate with the text “On the Moon Since 1969”.

Hasselblad was famously chosen by NASA to provide two cameras for the Apollo 11 moon landings, both of which have remained on the moon's surface for the last 50 years. A third, black, camera was used in the command module, and actually returned to Earth. Hence the significance of the Hasselblad 907X Special Edition being in matte black, to honor that space-faring original…

The best binoculars in 2019: for birdwatching, sports and more
The best helmet camera for motorcycles, cycling and adrenaline junkies
The best Google Pixel 3 cases in 2019