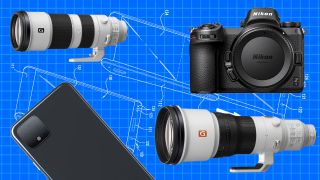 This week was all about new tech – some of it officially confirmed or teased by the manufacturers, others leaked via rumors or patent filings.

It's all grist to the mill as far as we're concerned, though. Whether it's today's technology or a glimpse into what tomorrow has in store, we love nothing more than getting hip-deep in the latest camera gear.

What we're not so keen on, however, is dwelling on the fact that the camera industry is stuck in quicksand, with far more valleys than peaks as far as business is concerned.

And sadly, that's the subject of the week's biggest story…

It's no secret that the camera industry is struggling, but the latest point-of-sale report from Japanese body BCN Retail shows just how sobering the situation is, with Nikon taking some very serious knocks in its home territory.

Despite maintaining a 26.7% share of the market, Nikon saw its camera sales drop by 15% – and worse, the actual value of those sales bottomed out by a whopping 28.5%. The industry's current hole is going to be a difficult one to get out of.

Remember last week's story about the (very likely) stolen Sony telephoto lens that turned up on a Japanese auction site despite not officially existing yet? Well, now Sony has officially announced it.

With Sony's surprise already spoiled by a certain Japanese auction, the manufacturer sprung another one on us by announcing the monster Sony FE 600mm F4 GM OSS – which will weigh in at a much less agreeable (though par for the course for such a lens) £12,000 / $13,000.

The business of camera phone news is the business of leaks. So early sneak peeks at upcoming models months ahead of release is very much business as usual.

What's not so usual, though, is for such a long-range sneak peek to come courtesy of the phone company itself. Which is what made Google's early look at the Google Pixel 4 so out of the ordinary.

The new camera phone won't be arriving until October, but Google decided to give the world a glimpse at its upcoming flagship – and its brand new twin-camera setup in a raised square array.

Read more: Google Pixel 4… this is what it will look like!

We've heard water cooler chatter about Nikon's next mirrorless Z-system camera for a while, but now we've had the most reputable report yet about the camera that's likely to be the Nikon Z5.

This puts the Z5 in direct competition with the Canon EOS RP, and is Nikon's attempt to broaden its consumer base and appeal beyond its existing customers.

Its latest crazy idea is a roll-up display that 'stretches' as you pull it out, almost like extending a tape measure, increasing the screen size by some 60%.

While Samsung's design example has been applied to a camera phone, the company notes that it could be deployed in everything from tablets and desktop computers to smart glasses and cameras. If it doesn't break after 24 hours, that is.

The best Pentax lenses in 2019

The best Lensbaby and Lomo lenses