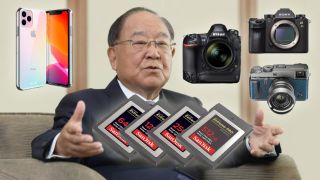 New launches from Canon and Sony dominated the camera news headlines last week, so this week it was Nikon's turn to do a little jig in the spotlight with a big announcement of its own.

Not to be outdone, Canon then scored a few sneaky points by being first to market with camera that uses a new technology that Nikon had very publicly embraced. Of course, Canon's CEO then reiterated that the camera market collapse will continue and that things will get worse before they get better.

There's also news on the new photography oriented iPhone as well as the next camera from Fujifilm. Plenty to digest as always, so let's get started…

Read more: Camera market to continue to shrink, but is US-China trade war partially to blame?

New flagships from Nikon and Sony

It's certainly been the year of new flagship cameras. Olympus kicked off 2019 by launching the Olympus OM-D E-M1X, and now two more manufacturers are following suit.

Nikon officially announced the development of the Nikon D6 DSLR, its long-rumored replacement for the D5. Mirrorless cameras might dominate the headlines in other areas of photography but, in the pro sports photography market, ruggedness, dependability, speed and the support of a professional lens and accessory system is still the priority.

Still, Sony's focus is entirely on the inevitable mirrorless future. And the latest rumor is that its own replacement flagship, the Sony A9 II, will "DEFINITELY" be announced in early October. With pro shooters looking to kit up ahead of the Olympics, it's an exciting time to watch this sector of the market. Your move, Canon…

A Japanese website published an interview with Canon CEO Fujio Mitarai, where he said that the camera market will continue to shrink over the next two years. In this interview, Mitarai stated that (translated by Google Translate), "Single-lens cameras… peaked at 18 million in 2012… the number of units [has] decreased by almost half to 10.3 million units, and this trend will continue for another two years."

Mr. Mitarai goes on to say that Canon is preparing for compact camera sales and single-lens camera sales to each respectively fall to 5-6 million units. However, this isn't the only difficulty that Canon (and likely other camera companies) are facing. "The external environment is also bad due to trade disputes between the US and China." Mr. Mitarai stated…

While we wait patiently for more details on the imminently arriving Fujifilm X-Pro3, we do at least know one thing: it will arrive in a brand new color that's not currently available on the X-Pro line.

Style aside, though, the question of substance is just how many megapixels the camera will be packing, now that the Canon EOS M6 Mark II has shaken things up with a huge 32.5MP sensor.

In another tantalizing piece of Fujifilm X-Pro3 news, an intriguing rumor emerged that it would finally receive the flip screen treatment – but not any ordinary flip screen. Apparently, the X-Pro3 will house its LCD screen on the inside of a flip-down panel…

CFexpress cards arrive, Canon first to use them

Is a new era in memory card speed about to begin? SanDisk has become the first manufacturer to place CFexpress cards on sale – a new class of memory cards that promise blisteringly fast data transfer speeds of up to two gigabytes per second.

And then following quickly after, Canon has launched a new camera that can use these superfast memory cards – which had been championed by Nikon and will reportedly feature in the upcoming D6.

The new Canon EOS C500 Mark II cinema camera uses twin CFexpress card slots, and Nikon has already announced that it has developed firmware for the Nikon Z 6 and Z 7 that will enable them to be use CFexpress memory instead of XQD cards…

Thanks to the cascade of leaks leading up to its launch, there won't be too many surprises when Apple CEO Tim Cook takes the stage, but there are still enough questions about the different models to warrant a bit of explanation.

The iPhone 11 Pro and iPhone 11 Pro Max will each possess Apple's new triple-camera array, along with other features such as a 25% larger battery that can wirelessly charge other devices, while the base iPhone 11 model will retain the dual-camera setup of its predecessors…