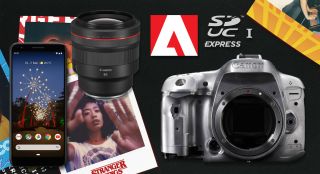 It's been a fairly eventful week in the world of photography, with a major new camera phone launch, a highly collectable special edition camera released, a pair of new lenses from Canon, and the latest on a freshly minted new memory card standard.

Plus, the facts – not just the kneejerk internet reaction – surrounding the Adobe CC Photography Plan pricing furore. Yes, that was last week's news, so consider it a bonus entry for this week, since this is the first installment of our Weekly Wash!

So here are the five biggest camera news stories of the past week. Click the links at the end of each one to read the full report…

One of the most fascinating stories of the week is the confirmation that Canon has registered a new 32-megapixel APS-C camera. That's noteworthy for a number of reasons, not least of which that 32MP is a significant bump from Canon's existing APS-C bodies, which have all maxed out at 24MP.

And let's not forget that 32MP is more pixels than any camera in Canon's lineup except for the high resolution EOS 5DS and 5DS R models.

The bigger picture, however, is what this new camera is and where it fits in the manufacturer's hierarchy. It would seem to be a successor to either the Canon EOS 80D or the Canon EOS 7D Mark II… but the latest rumor suggests that it could actually replace both cameras, merging the two lines into a single new body.

The world of camera phones was dominated by Google this week, as it announced the Pixel 3a and Pixel 3a XL – the affordable iterations of its flagship Pixel 3 (which we think is the second best camera phone available) and Pixel 3 XL.

While there have been a few cutbacks, notably in terms of the manufacturing materials and the loss of a secondary selfie camera, these two phones are otherwise very close to their older siblings.

This is especially true in the case of their cameras, as both phones pack the same primary sensors and lenses as the Pixel 3. They're incredibly capable camera phones at an unrivaled price – and the new Google Maps functionality is especially cool.

In a fascinating interview with the head of the SD Association, it was revealed that it wasn't the photographic industry that drove the development of the new SD Express memory card format.

Rather, the new standard – which uses the PCIe (Peripheral Component Interconnect Express) and NVMe (Non-Volatile Memory Express) protocols used by the CF Express and XQD format, and makes the new cards behave more like SSD storage – was pushed for by the likes of the mobile and videogames industries.

Thus, while the first SD Express cards are due for release in 2020, it isn't expected that camera manufacturers will start adopting the standard until 2021 (though thankfully the tech is backwards-compatible, so all your existing SD cards will still work).

Polaroid gave fans of retro cameras and retro TV shows plenty to smile about this week, as it announced a special edition OneStep 2 camera and i-Type film inspired by the Stranger Things series.

The Netflix show kicks off its third season on 04 July, so Polaroid has commemorated the pop culture phenomenon with the Polaroid OneStep 2: Stranger Things Edition – which features a throwback colorway and upside-down branding, in a nod to the Upside Down realm featured in the show.

And what better film to use in the camera than the Color i-Type Film Stranger Things Edition, which features 16 unique designs inspired by the show randomly inserted into each 8-pack of film.

The manufacturer also cleared the air on the DS version of the lens, assuring us that it is definitely not a traditional soft focus lens, but offers even softer blur and smoother bokeh than the its standard counterpart – even though it loses a 1.5 stops of low light performance.

You could almost see the torches and pitchforks marching across your screen last week, as Adobe's £9.98 / $9.99 Photography Plan price disappeared, prompting The Internet™ to cry bloody murder.

However, while angry forum users were quick to tell their spouses to fetch their shotguns, lost in the furore was the truth of the matter – Adobe was simply running some pricing visibility tests (and the results of those tests were loud and clear).

We contacted Adobe for an official response to the situation, which you can read at the link below, but suffice to say that you don't have to worry about twice as many pennies coming out of your bank each month. So you can put the shotgun away again.