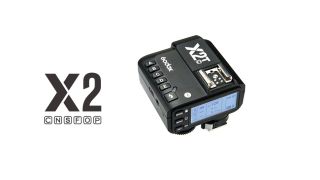 The Godox X2T has been announced today. Like its predecessor, the X1T, it’s a flash trigger designed to mount to a camera’s hotshoe and offer a wide array of lighting-control functions.

Using the built-in wireless radio system, the X2T works in tandem with Godox flashes, providing stable and reliable signal transmission that ensures all your gear stays in communication at all times.

Differences include additions of group buttons on top of the control unit, allowing you to easily and quickly separate flash units into groups and access them separately. These buttons, as well as the function buttons, are all backlit, making them also easy to use in the dark. The control dial has been repositioned to the lower left corner to reduce the extent to which it interferes with camera operation, and the LCD display has been enlarged for greater ease of use.

Godox has also added a new scan setting that can automatically detect the clearest, most interference-free channel. Thanks to Bluetooth support, the X2T can also now be controlled with a smartphone – the GodoxPhoto app is available for both Android and iOS devices.

The X2T locks easily and securely into a hotshoe, and its power output can be set in increments of 1/10. It also supports TTL for camera from the vast majority of major manufacturers, including Canon, Nikon, Sony, Fujifilm, Olympus and Panasonic.

No word yet on pricing for the Godox X2T or when we’ll able to try it out, but in the meantime you can head to Godox’s website for a closer look.