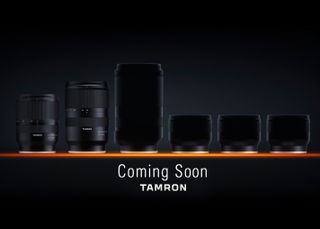 Tamron has released a tantalizing sneak peak video of four new mirrorless lenses, and in response countless people across internet have dutifully donned their Sherlock Holmes deerstalkers and are trying to decipher what each one of these mysterious lenses could be.

The video, which you can view below, begins by showing the two lenses in Tamron's current Sony E-mount lineup, the 17-28mm f/2.8 and the 28-75mm f/2.8. It then reveals the silhouettes of four new lenses. One of them looks to be a telephoto zoom and the others seem like small and light primes.

The enigmatic zoom has particularly piqued the interest of Tamron users. Considering the past two Sony E-mount lenses amount to a focal range from 17-75, many are speculating that this new potential zoom will be a 70-200mm (or similar). They're also saying that it'll likely be f/2.8 to complete the zoom lens trilogy.

So, is there evidence anything to support this? Well, in April of this year Photo Rumors reported that a Tamron representative said "people really want a telephoto zoom to cover focal lengths longer than 75mm. We’re looking [into] that."

While this doesn't necessarily confirm a 70-200mm lens specifically, it does seem like the natural next step for Tamron's lineup of Sony E-mount zoom lenses. 70-200mm f/2.8 lenses are super versatile and always sought after, so we would honestly be surprised if this mysterious lens turned out to be something else entirely.

As for the teased prime lenses, these seem to be even more of a mystery. We would personally like to see a nice, fast 50mm and 24mm, but the actual focal lengths are really anyone's guess.

Unfortunately, we likely won't see these lenses physically materialize for a while. With the official announcement rumored to be at the PhotoPlus show in October, who knows when they'll actually start shipping.

Until then, we'll be keeping our ear to the ground to find out exactly what these lenses will turn out to be.