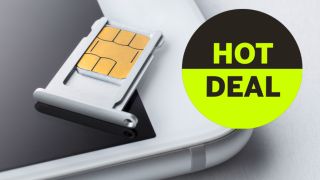 Smarty has just cut the cost of its unlimited data deal - making this what is probably the best SIM only deals at the moment. The cost is just £18 per month - which is 10% reduction on the usual fee. And the big attraction, compared to similar SIM only deals, is that there is no commitment - as you have a one month rolling contract you can cancel at any time

If you keep running out of data every month, and want an affordable option where you never have to worry  about download sizes or about switching on data-hungry app then this could be for you. It is a great deal for those who stream video and download loads of files on their daily commute. And there are options for those who want even more data too.

Smarty Unlimited SIM-only deal |
Unlimited 4G data | Unlimited calls | Unlimited texts |
Deal price: £18 a month
This unlimited 4G SIM-only plan gives you unlimited data, unlimited voice calls, and unlimited SMS texts - and all you pay is £18 a month for life. This is the plan for power users, who want to stream video all day long without worrying about the cost.
UK deal - promotional limited-time offerView Deal

This amazing SIM Only deal comes courtesy of Smarty – a virtual UK 4G network operated and run by Three, but which gives you a better price and less restrictions that you get from Three itself.

If you are looking to spend less, then consider the £10 a month SIM-only deal includes 30GB of 4G mobile data, unlimited calls and unlimited text messages. It means that you won't have to turn off navigation services when in a strange city, or struggle with those annoying wifi access forms in pubs and restaurants. What's more tethering and personal hotspot data usage is included in your data coverage.

There are no long-term contracts to worry about... this is a rolling one-month deal. So when you decide to go off-grid, or find an even better deal, you can simply cast your Smarty Sim aside without worrying about financial penalties.

Like the Three network, Smarty doesn't ever restrict your mobile data, either – no matter how much you're using to stream Netflix box sets during your train journey, or however many pictures you share with your fans on Instagram. And you can use your allowance for tethering too.

If you don't need unlimited data, then this £10 per month SIM only option will still give you a whopping 30GB of data each month, as well as bottomless minutes and texts.