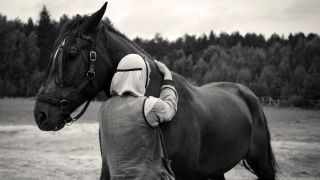 The  World Photography Organisation has released preview images of work developed as a result of a Sony Grant.

The grants have enabled Alys Tomlinson and Tom Oldham from the UK, Luca Locatelli of Italy, and US-based Hungarian photographer Balazs Gardi.

Alys Tomlinson, who was awarded the title of 2018 Photographer of the Year at the Sony World Photography awards in April 2018, has used the grant to travel to Belarus to shoot her series, Ex-Voto, working with a nun named Vera.

Tom Oldham, first place in the Professional Portraiture category in 2018, has worked on his series Shoot An Arrow and Go Real High in Paris, New York and London. The series looks at LGBTQ+ community events that originated in 1970s Harlem.

Balazs Gardi, first place in the Professional Sport category in 2018, has worked on a series looking at the importance of soccer to the immigrant communities of Oakland, California. Can I Play? explores identity and belonging.

Luca Locatelli, first place in the Professional Landscape category in 2018, has developed his series MATERIA: How we live on this planet, which tackles humanity's response to the strains it is placing on the planet.

The 2019 edition is currently open for entries.

All entries are free at www.worldphoto.org/swpa. The Student competition closes for submissions November 30, 2018, Open and Youth competitions close January 4, 2019 and the Professional competition on January 11, 2019.