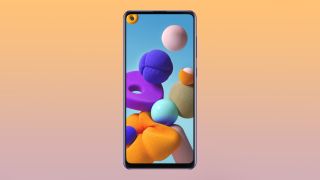 Update 15/05/20: Samsung has officially announced the new Samsung Galaxy A21s, which features an immersive Infinity-O display, a quad camera and a long-lasting 5,000mAh battery. The A21s comes in a range of three vibrant colors that feature a unique 3D Glossy and Hologram effect. Its powerful quad camera features four different cameras, including a 48MP main shooter, an 8MP ultra wide camera and a 2MP macro camera.

The Samsung A21s also features a 2MP depth camera, which allows you to use a Live Focus feature where you can add a blurred effect to the background of your favorite photos for a professional finish.

Conor Pierce, Corporate Vice-President of Samsung UK & Ireland says, "The Galaxy A21s offers must-have features at an affordable price. From 5G, to best-in-class display,. we are committed to bringing innovation to our Galaxy A Series portfolio, ensuring we can offer the best mobile experience no matter what your budget is."

The Samsung A21s will be available to order from 19 June in Black, White and Blue, with prices starting from £179.

For anyone who's a fan of Samsung camera phone technology, but reluctant to pay the high prices demanded by the Galaxy S20 range, this tidbit of camera phone news might just be for you. The Samsung Galaxy A21s has been rumored for a while, but now specs, price and renders of this upcoming affordable phone have been leaked.

The Samsung Galaxy A21s will have a 6.5" PLS TFT display of 1,600 x 720 pixel resolution and a fingerprint reader on the back near camera unit. It will have an Exynos 850 SoC chip and 3GB of RAM. The Galaxy A21s will run Android 10 with One UI and have two storage options, a 32GB and 64GB. However, it will also have a microSD card slot so that you can increase your storage capacity if you wish.

As reported by GSMArena, the Samsung Galaxy A21s will have four camera arranged in an L-shaped quad on the back of the phone. These will apparently be made up of a 48MP f/2 main camera, an 8MP f/2 ultrawide camera and a 2MP macro module. GSMArena states that the purpose of the fourth camera isn't known at this time, but that it's likely a time-of-flight camera.

Meanwhile, the selfie camera on the Samsung Galaxy A21s is mounted in a punch hole in the upper-left corner and sports a 13MP sensor.

The Galaxy A21s is rumored to be 8.9mm thick, weigh 191 grams and have a 5,000mAh battery that will be charged through a USB-C port. For anyone hoping that the A21s will support 5G, they'll unfortunately be disappointed as this phone will only support 4G networks.

The renders for the Samsung Galaxy A21s show that it will come in three colors, black, white and blue. It's expected to arrive by the end of May and will have a starting price of €199 or €209.