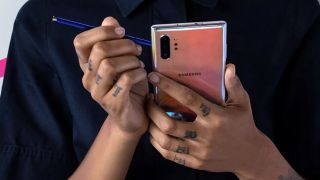 Samsung smartphone enthusiasts have been eagerly awaiting the arrival of the Samsung Galaxy Note 20 and the Samsung Galaxy Fold 2 – and they certainly won't be disappointed with this juicy bit of news. Samsung has used its Q1 Financial Results to confirm that both of these upcoming phones will be released in the "second half" of the year.

Samsung referred to both the Samsung Galaxy Note 20 and the Samsung Galaxy Fold 2 as "differentiated products in the premium segment". This definitely makes sense, as the Note 20 is rumored to be receiving a substantial update to the S Pen that's set to impress Samsung fans.

We also aren't surprised to hear the Samsung Galaxy Fold classified as a 'premium' product, considering the innovative nature of its folding screen. While the first edition had its teething pains, we'll be interested to see how the Galaxy Fold 2 improves upon its first design.

However, despite the fact that Samsung has listed both the Galaxy Note 20 and the Galaxy Fold 2 as part of their premium range, is it possible that smartphone buyers might be able to expect more affordable prices than usual?

With the introduction of 5G, smartphone manufacturers are being forced to adjust the prices of their flagship models to accommodate this new and expensive technology. However, will customers really be willing to pay premium prices for products that don't include what is very obviously the next step in smartphone technology?

We wouldn't be surprised to see more affordable prices for premium products that don't include 5G, such as the Galaxy Note 20 and Galaxy Fold 2. We'll have to wait to hear more official information on pricing, but in the meantime we'll be keeping our ear to the ground to bring you the latest news and rumors.