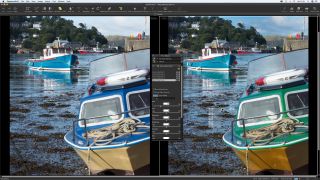 Color Control Points are back in Nikon's own editing software. The latest version of Nikon Capture NX-D, released to support the new Nikon Z7 full-frame mirrorless camera, adds this powerful selective adjustment feature – which was suddenly cut from the software four years ago.

In 2014 Nikon dropped support for their paid-for Capture NX2 post processing app, replacing it with a free program called Capture NX-D. Some may argue that Nikon threw the baby out with the bath water by no longer providing Control Points in Capture NX-D. Control Points enabled Capture NX2 users to sample a problem area (such as an over-exposed sky) and selectively adjust a range of properties including Hue, Saturation and Contrast.

We’re happy to see that with the release of Capture NX-D 1.5.0 the Color Control Point feature is back, so you can take your Nikon Raw editing to the next level, allowing you to fine tune your NEF files. But there is JPEG support too – Indeed even Canon users who shoot in JPEG format can enjoy many of the tools in the free Capture NX-D app - including working with Control Points.

The sampled area being adjusted by a Control Point can be increased or decreased by tweaking a Size slider. The adjusted area blends with the rest of the shot in a graduated way, enabling seamless selective adjustments to color and tone in specific regions of the shot. You can also preview the range of the adjusted area using a greyscale display that works like a Photoshop layer mask, enabling you to fine-tune the location and strength of the Control Point’s adjustments.

Control Points can be expanded from the default BCS (Brightness, Contrast and Saturation) controls to alter up to eight properties, including Warmth (W). This will enable photographers to selectively warm up a cold blue color cast in the shade without over-warming the correctly balanced colors in direct sunlight for example.

As well as Color Control Points the latest version of Capture NX-D features the latest Picture Control for the Nikon Z7, so you can quickly tweak that camera’s colors and tones in post-production. It also adds support for Nikon D3500DSLR and the Nikon Coolpix P1000superzoom bridge camera. The Camera and Lens Corrections panel also has a new Diffraction compensation box to tick, which will help reduce diffraction related blurring in shots snapped with a small aperture.

When we searched for an update from within Capture NX-D’s Check for Updates menu we didn’t see a link to get version 1.5.0, however you can download a Mac or PC version from the Nikon Download Centre .

The online Capture NX-D manual has also been updated to cover Color Control Points – you can download it here.