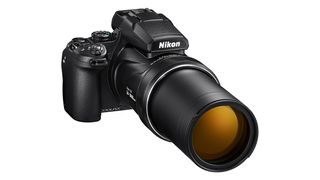 Nikon is one of a handful of manufacturers still catering for those after an all-in-one camera with a mammoth zoom range, and its latest COOLPIX P1000 is its most ambitious yet.

The COOLPIX P1000 has been crafted with a lens that offers a staggering 125x optical zoom, its focal range equivalent to 24-3000mm in 35mm terms. Using a Dynamic Fine Zoom option, however, it's possible to boost this to a focal length equivalent to 6000mm.

The lens, which offers a maximum aperture of f/2.8-8 and is supported by 5-stop Dual Detect Optical VR technology, directs light to a back-illuminated 1/2.3in sensor with a 16MP resolution, one that's capable of capturing images across an ISO 100-6400 range in both Raw (NRW) and JPEG formats.

Additionally, the camera can be set to shoot videos in 4K UHD quality at up to 30fps, or in Full HD at settings up to 60fps. Further good news for those intending to use the camera for more considered video recording is that Nikon has opted to fit a microphone input around its side, and also offer clean HDMI output.

To boost its appeal to those intending to use it for very specific applications, the camera is primed with special scene modes such as Moon Mode and Bird Watching Mode, although those wishing to capture subjects a little closer to them can also call upon a 1cm macro shooting option. The full suite of PASM exposure controls are also on hand, as is manual focus.

Around the back, Nikon has opted for a partnership of a 2.3million-dot OLED electronic viewfinder and 3.2in vari-angle LCD screen with a 921k-dot resolution. Other features include 7fps burst shooting, Wi-Fi and Bluetooth.

“The COOLPIX P1000 is the first of its kind for a compact digital camera,” said Jay Vannatter, Executive Vice President, Nikon Inc. “It raises the bar for superzoom cameras and is a testament to our commitment to delivering innovative tools that offer creative freedom to capture and allow users to share their unique visions of the world.”

Nikon US has stated that the camera will be available on sale in September, and that it will retail at £999.99/$999.95 (and you can pre-order it now through the above links). Pricing for Australia has not yet been made available.