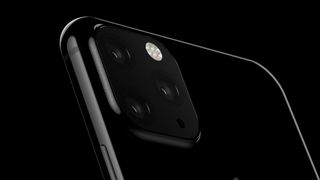 A new iPhone 11 camera rumour has surfaced, which backs earlier reports that Apple's latest handset will be getting a big lens upgrade.

Back in January, a leaked render did the rounds. While many dismissed the image due to the weird looking camera configuration on the back, a new report suggests that this will actually be what the iPhone 11 looks like.

The camera setup (three lenses in a triangle formation and a flash) looks a lot like a skewed version of what's on the back of the Huawei Mate 20 Pro and its this layout that has been seemingly 'confirmed' by Japanese site Macotakara.

The site explains that it has seen cases with square cutouts in the same area as the earlier render and it also likens the layout to the Mate 20 Pro.

It does speculate that this camera setup may well only be for 'premium' versions of the iPhone, however, those with a higher capacity of storage space.

The current crop of iPhones have a brilliant dual-camera setup, with a recent photography competition showing just how good the camera on the new iPhones is.

If Apple can marry its best-in-class bokeh, found on the iPhone XS Max with a three-lens setup then they could be busy creating a best camera phone contender - let's just hope Apple has found a way to get rid of the rather unsightly camera bump.