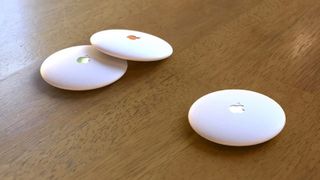 A mockup from Mac Rumors of what AirTags could look like (Image credit: Mac Rumors)

If you've ever gone to pick up your camera and had the gut-wrenching realization that it's not where you last left it, you might be interested in one of the lesser-publicized announcements from Apple's WWDC 2020 event. Apple has announced that it plans to extend its Find My network for locating devices to third-party companies.

This means that compatible devices will be able to sync to the network (even if they don't have internet connectivity), allowing you to locate them through the Find My app (previously known as Find My iPhone).

If you're wondering how this will help you find lost camera equipment, the answer lies in Bluetooth trackers. One of the most popular products is called Tile – and it consists of a small, square Bluetooth tracker that attaches to commonly lost items, such as wallets or keys. However, for months there have been rumors that Apple is gearing up to launch its own tracker called AirTags. Some people thought that the AirTags would be announced at WWDC, but now it's looking more likely that they'll be launched with the iPhone 12 later this year.

The developer page for this new feature from Apple says: "Introducing a new program that will let your customers locate your products using the power of the vast Find My network. With hundreds of millions of Apple devices around the world, advanced end-to-end encryption, and industry-leading security, users can locate their items within the Find My app with the peace of mind that their privacy is protected."

Interestingly, the upcoming Apple AirTags look set to be findable even if the item they're attached to is far away. According to Mac Rumors, if another iPhone user comes across the item, they'll be able to send you a text to let you know that the item has been found. You'll also receive a notification as soon as any iPhone comes across your lost item.

By opening up the Find My app to third-party companies, we might also see a similar functionality appear in trackers such as Tile, where the standard product currently only has a range of 150ft.