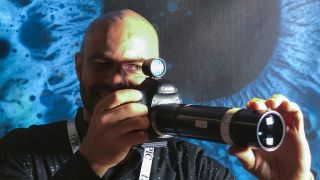 A German company is hoping to bring light field photography to the masses with its K|Lens, which attaches to a normal digital SLR or mirrorless camera in place of the usual lens.

A K|Lens prototype is on show this weekend at Berlin Photo Week, with the company planning to raise capital through a Kickstarter campaign in May 2020 to put the device into production .

Many will be familiar with light field photography through the cameras made by Lytro - which gave up selling its light field cameras last year, and ended up by being bought by Google.

A big attraction of light field photography is that allows you to adjust the focus of the image, after you have taken the shot. It does this by taking multiple images and creating a depth map of the scene. This depth map could also be used for a number of other post-production effects – such as adding lighting effects that are applied at different intensities depending on their distance from a point in the scene.

The K|Lens device is designed to work with full-frame sensors, and works a bit like a kaleidoscope (hence the K in the name). The lens splits the scene into nine different images which are recorded on the scene. The K|Lens team claim they are working with an undisclosed big-name optical company over the construction of the light field lens.

The manual focus lens is about 250mm long, weighs 1000g, and has a focal length equivalent to around 80mm. The only controls are the aperture and manual focus rings.

It is the way in which these images are combined by the software is where the magic really happens. K | Lens have an app that will allow you to show the combined light field image on your smartphone screen, and adjust the focus point whilst in the field.

Images will be displayed in camera as a nine-tile mosaic with some makes of full-frame camera. But with Canon, at least, which have allow developers access to its camera's firmware via its EOS Software Development Kit, the image can be combined in camera via a menu option.

A big advantages that the K|Lens will have over the failed Lytro cameras will be that not only will you not need a special camera, but you will have marked increase in overall resolution.