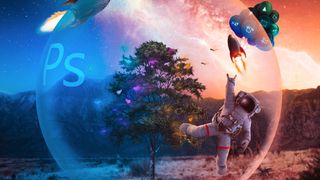 It's officially been 30 years since Adobe Photoshop first graced our computer screens with Version 1.0, with Adobe celebrating their impressive milestone today. It's fair to say that the existence of Photoshop has revolutionized many industries, but perhaps none more so than photography. Film and digital photographers alike were able to use Photoshop's magic touch to elevate their images, and their amazing creations were only made possible through Adobe's original innovation.

As our way of wishing the company many happy returns, we're looking back at some of the most important milestones Photoshop has had over the past 30 years – and peeking ahead to see what incredible innovations we've got to look forward to in the future.

In 1994, just four years after Photoshop made its digital debut, Layers were added to the program. This invaluable feature is perfect for non-destructive editing (where you're editing on layers on top of your image rather than on the image itself). Blend modes were also added in the same year, and Adjustment Layers followed in 1996.

The year 2000 brought Liquify to our screens, while in 2002 Adobe added the Healing Brush and Camera Raw to Photoshop as well. Content-aware Scaling came in 2008, and Content-aware Fill followed in 2010.

As Photoshop entered the 2010s, we saw the biggest shift since its inception. The CC Libraries were launched in 2014, making Photoshop more accessible with a subscription-based service. Other tools such as Face-aware Liquify, Select Subject and Object Selection Tool were launched in the following years and then in 2019 Adobe finally launched Photoshop on iPad.

These innovations have been part of the reason why Photoshop has been one of the most influential pieces of software for the past 30 years. But what do we have to look forward to in the future?

• How to download Photoshop and try it for free

According to Adobe, we've got some exciting times ahead. The next decade will bring significant improvements in the high performance processing of complex documents, Sensei machine learning and connected services to leverage the benefits of cloud computing.

We will also apparently see Photoshop on additional platforms and devices. Perhaps this means we'll be able to access a beefed-up phone version of Photoshop within the next decade.

Interestingly, Adobe are also promising adaptive learning content that will adjust to each individual to help them learn as much as possible. And, finally, Adobe are also exploring how they can create even more advanced image processing capabilities.

No matter what the future looks like for Photoshop, the past three decades have brought some incredible achievements. We can't wait to see what the next 30 years bring.