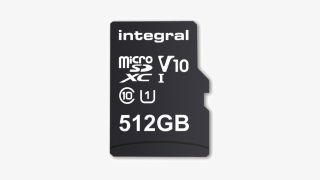 The move comes eight months after the company released a 256GB version of the same card, which joined existing 128GB, 64GB, 32GB 16GB and 8GB variants.

The new card bears a UHS-I Class 1 rating, which means it guarantees a minimum sustained write speed of 10MB/s. Read speeds are said to reach a maximum 80MB/s, although the company has not confirmed how much lower write speeds would be against this figure.

Additionally, the Video Speed Class 10 (V10) rating guarantees the same 10MB/s minimum sustained write speed for video recording. This makes it less suitable for 4K video capture, but does mean that it can successfully be used for Full HD recording.

Read more: How to understand everything written on your camera's memory card

With measurements of 15x11x1mm, microSDCXC cards are significantly smaller than regular SD cards, and weigh just 0.5g. Although they are more commonly employed by smartphones, tablets, drones and action cameras than by conventional cameras, they have occasionally been the default media format accepted by mainstream models designed for portability, such as Panasonic's recent Lumix GX800 mirrorless camera.

They can, however, be used in cameras that support regular-size SD cards though SD-shaped adapters, and one of these is provided with the card as standard, along with a five-year warranty.

Pricing for the new version is yet to be confirmed, although the current 256GB version retails at £129.99 in the UK. Integral states that the card is set for a February release.