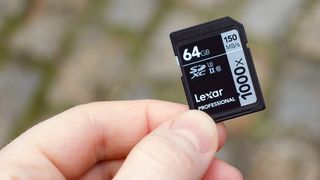 Memory cards are straightforward in use: you just pop them in your camera, format them and you’re off. Trying to make sense of their various figures and symbols, however, is another story.

• The best memory cards for your camera

The situation has become more problematic in recent years as more advanced cards have been inscribed with new terminology to indicate certain aspects of their performance.

More basic cards are thankfully free of many terms, but as cameras get more advanced it becomes even more important to understand whether you’re actually using the right card to do its capabilities justice. Fail to do so and you can end up having your camera's burst depth cut short or your video recording interrupted, and lots of hanging around waiting for images to be recorded.

To help clear everything up, we’re going to run through all the symbols currently used on common SD-type cards and explain what each one means.

This is the easy one: the manufacturer of the card. The most common names you will see here are Sandisk and Lexar, although Kingston, Transcend, Samsung, Toshiba and others are also commonly available. You may even have one from the same manufacturer as your camera.

Most people will have a card from one of the first two brands as these are the most popular, but there are perfectly good cards from the others that are often cheaper. As with hard drives, memory cards are typically only made by a handful of companies and simply rebadged by others.

Some brands are known for providing particularly good warranties or image-recovery software with their cards as standard, so you may want to factor these issues in if choosing between brands. Your best bet is to check the manufacturer's website for full details as to what you get with each.

This indicates where in a manufacturer's lineup a card sits. Not all manufacturers have these different classes, but those that do give you a quick idea as to what kind of performance you should be able to expect from a card.

Sandisk, for example, currently has Ultra, Ultra Plus, Extreme, Extreme Plus and Extreme Pro classes for its SD-type memory cards, as well as a more basic one that bears no particular designation. As you step up a class you are likely to see improved transfer speeds (more on this later), and more advanced cards may offer things like protection from water and freezing temperatures too. Naturally, this will be reflected in the asking price.

What about that switch on the side?

The switch on the side of full-size SD, SDHC and SDXC cards protects the card's contents. When this is pushed down, you can't write to the card nor delete anything from it. Make sure this is moved to its uppermost position if you want to shoot images or delete them, and be careful when inserting the card into your camera as it can sometimes move as you push it in.

All memory cards have a capacity that should be clearly indicated on the card itself. This could be as little as 4GB or 8GB (and even less for older SD cards), or as much as 512GB (at the time of writing). Larger 1TB and 2TB cards will at some point be available too, but frankly, even 512GB is way beyond most people's needs.

The larger the card the more images and videos you can squeeze on it, although quite what you end up in practice depends on a number of factors. Whether you shoot JPEG images or Raw files, for example, together with what level of compression you use, whether you shoot high-resolution videos and how the camera records these among other things.

Most people tend to go for a card that’s about 16-64GB in size, and these are now very affordable. From the perspective of security it's a good idea to have a number of smaller cards rather than a single large one, but the convenience of being able to fit weeks' worth of shoots or video footage onto a single, high-capacity card makes these tempting.

Currently, all SD-type cards fall into one of three camps: SD, SDHC and SDXC. They are all the same shape and size, but the type will be indicated clearly on its front.

SD (Secure Digital) cards are still in existence, but there is not much demand for them anymore as they do not offer the kinds of capacities and transfer speeds to do today’s cameras justice. Even if you do manage to find one, you’ll get considerably better value going for an SDHC or SDXC card, so they're best avoided.

SDHC (Secure Digital High Capacity) cards are those that have a capacity between 4-32GB (inclusive). As they get larger in size they double in capacity: so, you can either go for a 4GB, 8GB, 16GB or 32GB card. If you find an SDHC card with any other capacity – 21GB, for example – you probably need to start shopping elsewhere.

SDXC (Secure Digital Extra Capacity) cards are those that offer anything above this. These are currently 64GB, 128GB, 256GB and 512GB cards, but soon this will increase to even greater capacities.

This is where things start to get a little confusing.

Most cards have one or more of their transfer speeds written in either MB/s (megabytes per second) or with an 'x' to show this as a factor. This tells you how quickly the card can operate – more on this in a second.

The card below is one of a handful that has both. These figures mean exactly the same thing, but it can become confusing when trying to compare cards that aren't marked with both. This card is a good example of how you do just that; a speed of 150MB/s is equal to 1000x, as a speed of 150kb is equal to 1x. So, a card with a 45MB/s rating is the same as 300x, 90MB/s is the same as 600x and so on.

Often there will only be one figure, and in this case it will refer to the read speed. Read speed is how quickly information can be read from the card. This is different to the write speed, which refers to how quickly information can be written to it. So, when you take images on your camera they are written to the card. When you put your card into your computer, images are being read from it.

Read speeds are typically a little bit higher than write speeds, so if you only see one figure it will be this one. After all, a higher figure looks more impressive. Some cards even show both. Either way, you should be able to find what both of these speeds are on the card manufacturer's website.

This is particularly useful to note if you shoot with a modern camera with a high-resolution sensor, especially

This is particularly useful to note if you shoot with a modern camera with a high-resolution sensor, especially if you capture bursts of images in one go. You may find with slower cards that you can't shoot images consecutively for as long a period (known as burst depth) or that you're just having to wait around for your camera to clear these to the card.

Read more:
The best memory cards for your camera