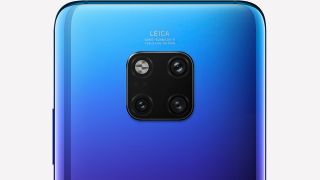 We've heard lots of rumours about the Huawei P30 Pro, but Huawei is making sure that the P30 will have top-notch specs to rival its current flagship, the Mate 20 Pro.

This is according to mega leaker Evan Blass, who has it on good authority that the camera phone will have specs that are familiar to those who have used a Huawei Mate 20 Pro and a Huawei P20 Pro.

His sources have noted that the Huawei P30 is set to have a triple rear camera setup, while the main camera will be 40MP. There will be 5x lossless zoom on board and you can also expect a 24MP selfie cam.

Although there's not much to go by, these specs do pretty much confirm that there will be the Mate 20 Pro's Kirin 980 chipset on board. And we can also expect that partnership with Leica to continue.

The Huawei P30 promises to be another imaging powerhouse, according to someone who's seen one: triple rear camera, with a maximum resolution of 40MP and 5x lossless zoom, plus a 24MP selfie cam. And this isn't even the Pro variant.December 21, 2018

What's interesting about these specs is that thee 40MP camera may actually be more megapixels that the Huawei Mate 30 Pro sports. This is because rumours are suggesting the Mate 30 Pro will go with a 38MP sensor but one that's bigger than the 40MP currently used by Huawei.

A bigger sensor does mean that it doesn't have to compete as much in the megapixel race, but quite how you market this come Huawei Mate 30 Pro release date will be difficult. This phone is also said to have four lenses.