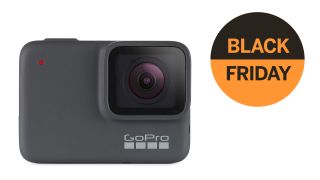 Take a deep dive into the Black Friday camera deals and you’ll find Amazon UK is offering the GoPro Hero7 Silver for just £169. The bonafide king of action cameras might have just released the Hero8, but its predecessor is still a very capable offering, whether you’re vlogging or capturing footage of glorious vistas.

Adventurous types can rest assured that the GoPro Hero7 Silver is ready for action, thanks to its waterproof build (down to 10m) and ability to record crisp, stabilized 4K video at 30fps. If that wasn’t enough, it features a 10MP camera, Time Lapse Mode and is of course compatible with a variety of GoPro accessories.

GoPro Hero7 Silver Digital Action Camera: £169 (save 40%)
Record 4K 30fps videos and shoot 10MP photos with the GoPro Hero7 Silver. This pint-sized action camera is waterproof up to 10m, making it an ideal companion for adventures.

If you're thinking of picking up the GoPro Hero7 or even the new GoPro Hero8, there are plenty more GoPro Black Friday deals. Check out the UK and US deals below.

GoPro Hero7 Black  -  now £270
Pick up the GoPro Hero 7 Black for just £270 at John Lewis, down from £379.99 for a fantastic saving of over £100! This amazing action camera can deliver 4K60 video, 12MP photos and stunning time lapse videos while you explore your scene.
UK dealView Deal

GoPro Hero7 White - £129 from £149
The GoPro Hero7 White may be last year's model, but because of this it is now available at its best-ever price. It still shoots 10 megapixel stills and does HD video at 1440p at 60fps. It can use all the usual Hero accessories too, and is completely waterproof. At this price we found at Argos, it might even make a great present for someone in the family.
UK dealView Deal

GoPro Hero8 Black: £329 from £429.99
GoPro's flagship action camera, the GoPro Hero8 Black, is now available at the cheapest price we have seen it - but also with a set of very useful accessories, that on their own are worth about £50. You get the camera, headstrap, Shorty grip/tripod, spare battery and a memory card. This is an amazing deal!
UK dealView Deal

GoPro Hero7 White: $139 (was $199)
The Hero7 White is probably the best place for newcomers to action cams to begin – and with $60 off, there's never been a better time to get started! It offers crisp 1080p video at up to 60fps, along with blistering bursts of 15fps for stills – and it's waterproof to 32 feet!
US dealView Deal

Amazon Black Friday camera deals have arrived! Here are all the best bargains

GoPro Black Friday deals in 2019: the best offers we have found so far