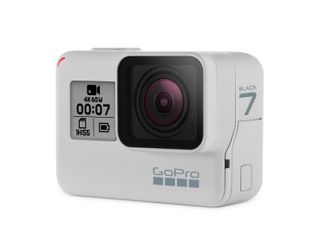 Well this could get confusing. The GoPro Hero7 Black – the flagship model and currently the best GoPro in the range – is now available in white. Dusk White to be precise.

We are used to camera manufacturers offering a choice of colour. But the problem for the GoPro customer is that there is already a GoPro Hero7 White in the range - which is a simplified, less expensive version of the Hero7 Black. Both were launched last autumn, alongside the Hero7 Silver.

The GoPro Hero7 Black heads our lists of the best action cameras in 2019.

Under the snowy hood, the Hero7 Black in Dusk White is exactly the same as the original. This is a 12-megapixel actioncam that shoots 4K video at up to 60fps - and can shoot at 240fps in 1080p resolution. It offers voice control, and built-in GPS, and is waterproof down to depths of 10m.

The Hero7 Black's main selling point was the debut of HyperSmooth, an impressive new image stabilization technology that brings a smooth, stable, flowing look to even handheld video. If that's a huge step forward, so is TimeWarp. A refinement of HyperSmooth, TimeWarp allows you to create a TimeLapse while walking around a scene, but also increase the speed by 30x for short, shareable and silky-smooth TimeLapse videos. It's enabled by a massive increase in the memory inside the GoPro Hero7 Black, from what was on the Hero7 Black.

The GoPro Hero7 Black in Dusk White will be on sale from this weekend.