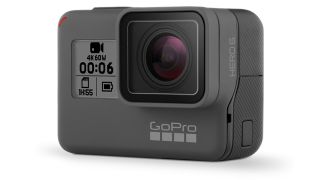 The company had already confirmed that a HERO6 model would be on its way, but had not disclosed any specs until today's unveiling in California. What we've found out today wasn't a complete surprise, however, following a leaked image of a box shot earlier this month.

Just as its HERO5 Black predecessor, the GoPro HERO6 Black features a 12MP sensor at its heart. This captures images at 4000x3000 pixels, with support for Raw  capture and 30fps burst shooting.

Video specs are headed by 4K UHD (3840x2160p) video recording to 60fps, which is double what the HERO5 Black could manage. Full HD capture to 240fps is also possible.

The new model also echoes the waterproof capabilities of the HERO5 Black, with enough protection to descend 10m underwater without the need for an additional casing.

The new model picks up where the HERO5 Black left off with regards to processing power, with its new GP1 chip allowing for "2x the performance". The company also promises its most advanced image stabilisation ever in the new model.

Other improvements over the HERO5 include better low-light performance and wider dynamic range, and the camera can also record both images and videos in a high dynamic range option.

The HERO6 Black is also compatible with the previously seen QuikStories feature, which automatically uploads footage to the cloud and creates a short video.

GoPro has also announced the Fusion, a waterproof 360-degree camera aimed at capturing "the moment."

Billed as "arguably the most creative, versatile tool ever made" the camera boasts front and rear lenses that capture spherical 5.2K footage at 30fps and 3K footage at 60fps.

The camera also offers an Angel View perspective, which cleverly disguises any poles to which the camera is mounted to make it appear that the video is being captured by "an angel."

The model also features a clever OverCapture option, which allows users to recapture a fixed-perspective video from a 360-degree recording, as though they had someone else filming them to begin with.