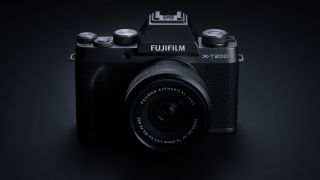 The new Fujifilm X-T200 is a mid-range mirrorless camera that bridges the gap between simple mirrorless models without viewfinders and more advanced models. It supersedes the Fujifilm X-T100, a camera we hold in high regard for its clean lines, performance and value for money.

The X-T200 builds on this with proper 4K video capability, faster and more advanced autofocus and a 3.5-inch vari-angle touchscreen larger than any other camera's (apart from Fujifilm's own X-A7).

Fujifilm's aiming the X-T200 at smartphone upgraders who want the quality of a larger APS-C size sensor, the versatility of interchangeable lenses and more advanced photographic controls, but without sacrificing the familiarity of a big touch-screen interface. It looks set to be one of the best cameras for beginners, if not one of the best mirrorless cameras all round.

Fujifilm's clearly committed to its lower-cost mirrorless camera range, because on the same day as the X-T200 announcement it released a low-cost Fujinon XC 35mm f/2 lens, which go on sale in February 2020 for just $199 / £169. At the other end of the scale, Fujifilm has also announced a new medium format FUJINON GF45-100mmF4 R LM OIS WR lens.

One of the most striking features of the X-T200 is the large, vari-angle display. It's a 3.5-inch screen that's half an inch larger than the 3-inch screens on most rival cameras. It's also only the second Fujifilm camera to offer a fully pivoting vari-angle display – previous models have been restricted to a tilting mechanism. The display also has a wide 16:9 aspect ratio that's perfect for capturing and displaying 4K UHD video.

The video features have been substantially upgraded over the old X-T100. The X-T200 can now record 4K UHD video at 30fps, in line with the capabilities of rival cameras, and full HD video at up to 120fps for a 4x slow motion effect. Other advantages include a new 'electronic stabilization' mode and a feature Fujifilm is calling 'HDR Video'.

The 24.2-megapixel sensor and processor have been upgraded in this camera for 3.5x faster performance and continuous stills photography at 8 frames per second and a much reduced 'rolling shutter' effect in video. Sometimes called the 'jello' effect, this can make objects appear to distort from side to side if the camera is moved quickly, but it's fixed or improved in cameras with faster sensor readout and processing speeds.

Like other camera makers, Fujifilm is constantly improving its autofocus systems, and the X-T200 now has fast phase detection autofocus pixels across the sensor area with updated Face/ Eye Detection AF, which is especially useful when shooting selfies or vlogging with the screen flipped round to face the front.

What's interesting about the X-T200 is the way it takes mirrorless cameras in a new direction, notably with the supersized touchscreen display, designed to make photographers previously used to smartphones feel at home straight away.

However, the X-T200's light weight, compact design and big touchscreen display could give it special appeal to smartphone users who've been waiting for a camera that's more like their phone.

• These are the best Fujifilm cameras right now
• What's the best camera for beginners? We list our favorites
• We list the best mirrorless cameras to buy today