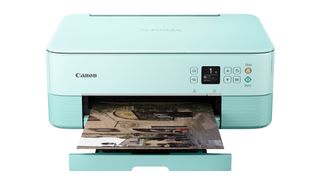 With Canon and Epson really being the only major players still left in the home desktop printer game, Canon is doubling down on its strong market position and releasing a relentless stream of new models. The latest printer batch is a quartet of new PIXMA TS-series models: the TS8350, TS6350, TS5350 and TS3350.

The TS8350 is the flagship of the four new releases, and represents a minor refresh of last year's TS8250. The new features are automatic paper width sensing, and the addition of 5GHz Wi-Fi to the usual 2.4GHz band. Otherwise the specs, features and case design remain the same as the TS8250:

The PIXMA TS8350 has an RRP of €195 and will be available from September. UK pricing has yet to be officially revealed, but £150 seems likely.

One rung down the ladder of newly released PIXMAs is the TS6350. It's slightly slower than the TS8350, with a borderless 10 x 15cm photo taking 4 seconds longer at 21 seconds. You also get five separate ink cartridges compared to the TS8350's six, and the main control screen is smaller - a 3.7cm display vs. a 10.8cm touch-screen. Key features:

Expect to pay €139 for the PIXMA TS6350, with availability from September.

The second-cheapest, but most eye-catching offering in the new PIXMA TS-series lineup is the TS5350, which will go on sale with an RRP of €105 in September.

Four body colour options will be available, with the oh-so-pedestrian black and white models joined by a rather fetching bubblegum pink version. The dentist's choice is sure to be the mint green edition, but strangely Canon is making us wait until early next year for it. You could call that a disappointmint. #SorryNotSorry

The cheapest of the newly-launched models is the PIXMA TS3350, which is set to retail for just €75 in September. UK pricing is still unverified, but given that its predecessor, the TS3150, can now be had for less than £50, the TS3350 is unlikely to cost much more.

As you'd expect at this price point, features are limited (you know the marketing department is struggling when 'rear paper feed' is listed as a feature), but you do get  borderless photo printing up to 13 x 18cm. Oh, and an auto power off feature. Sold.