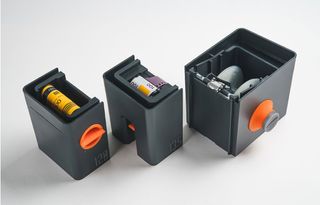 It's official: film is back and better than ever. Targeted at those who love the vintage vibes of film photography, but who also appreciate the speed and ease of digital, the Lab-Box Developing Tank aims to answer the question, "How can I develop film quickly on-location?"

Developed by Italian company Ars-Imago, this daylight development tank was first previewed at Photokina and then successfully crowdfunded on Kickstarter, with 4,791 backers pledging €656,903.

The most impressive aspect of this product is that it can be used without a darkroom or changing bag, meaning that you can load your film and develop it in broad daylight.

Available from mid-August, Lab-Box has created a developing tank with two different modules, one for 35mm and one for 120 roll film. You can either buy a 35mm-only tank, or the 35mm and 120 roll film tank.

If you initially purchase the 35mm-only tank but then develop a hankering for medium format, you can then buy the 120 roll module later. You can also purchase a crank to attach to the developing tank knob for an easier way to agitate the film while it's developing.

The Lab-Box can be used for both black-and-white and C41 (color) processing. However, just as with ordinary color film processing, you have to maintain a specific temperature throughout in order to achieve the correct results, so unless you're an experienced film shooter you'll likely want to continue visiting a professional lab if you typically shoot on color.

With the 35mm development tank alone going for £149 (and a single-chemical developer running at around £20 per bottle), no one could say that film development at home is a cheap hobby. However, when you remember that developing a single roll of film can cost between £6-8 (without even considering the price of prints), it wouldn't take many rolls for this to become an incredibly cost-effective way to shoot film.

With film photography currently enjoying a warmly welcomed renaissance, analogue processes are being updated with modern technological updates to make them both simple and accessible for the consumer.

The best photo printing online in 2019
Cheap Instax film deals – great buys on print packs in an instant!
The best film cameras in 2019: cameras that recapture the magic of film