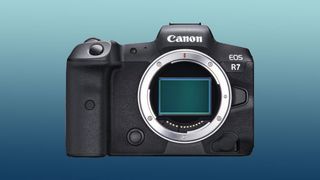 Our mock-up of the Canon EOS R7 (Image credit: Canon)

Forget the Year of the Rat – 2020 must surely be the Year of Canon. Having released the Canon EOS-1D X Mark III, announced the Canon EOS R5 and (reportedly) preparing to release a whole slew of game-changing Canon RF lenses, you would forgive the imaging giant for taking a breather. However, Canon shows no sign of slowing down, with rumors circulating about a mysterious EOS R APS-C camera dubbed the 'Canon EOS R7'.

At first this might seem like a bit of a non-starter – Canon already has a line of APS-C mirrorless cameras, the EOS M. Why would Canon divert attention away from developing their increasingly successful full frame EOS R cameras when it doesn't even seem to be something consumers particularly want?

As reported by website Canon Watch, the rumor is that Canon might release an EOS R camera with an APS-C sensor in 2021, accompanied by three RF lenses designed for this model. This unnamed camera has been given the unofficial moniker of the 'Canon EOS R7', but it's likely that if this camera is real, it will be called something else entirely (just as the Canon EOS Rs turned out to be the Canon EOS R5).

Canon Watch posits that perhaps an EOS R camera with an APS-C sensor could replace the Canon EOS 7D Mark II, a popular camera that's starting to show its age. However, they also go on to say that: "The EOS 7D lineup was quite popular with wildlife photographers, getting an extended reach due to the crop factor, and it's likely Canon will not give up such a popular camera. On the other hand, it's pretty clear that Canon [has] embraced mirrorless technology and is putting a lot of stakes on it [sic]."

At the end of the day, it comes down to how Canon views mirrorless technology. If they truly see it as the future of photography, then we believe that an APS-C EOS R camera is an inevitability. More affordable APS-C cameras drip-feed consumers into higher-end full frame cameras, and having the same lens mount makes this transition much simpler. And after all, what's the point of having a shiny new lens mount if you're not going to invest in the infrastructure around it?

However, if Canon is still invested in their DSLR line, then would they want to dilute its selling power by creating another APS-C mirrorless option? (To say nothing of what this move would do to the EOS M line…)

Either way, the only thing we can do is wait and see what happens. However, we won't be sat twiddling our thumbs. With the Canon EOS R5 due to be launched soon and rumors that the Canon EOS R6 might also be announced within the next few months, there will be plenty of Canon news to sink your teeth into.