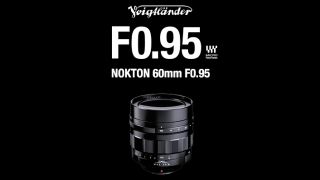 Feeling the need for speed? Yet another f/0.95 lens has been announced – this time by a company that has some pedigree in this niche category. The Voigtländer Nokton 60mm f/0.95 has been revealed for Micro Four Thirds systems.

This marks the fifth f/0.95 prime lens that the manufacturer has released (all for Micro Four Thirds), with the Voigtländer Nokton 60mm f/0.95 joining the 10.5mm, 17.5mm, 25mm and 42.5mm optics – all of which rank among the fastest lenses available on the market today.

Given the 2x crop of the Micro Four Thirds format, the becomes an equivalent 120mm lens in full-frame terms (and the existing lenses an equivalent 21mm, 35mm, 50mm and 85mm respectively). This gives Olympus, Panasonic and Blackmagic users a classic long portrait lens with extraordinary low light and depth of field properties.

The lens construction features 11 elements in 8 groups, with a pair of dispersion elements to reduce vignetting, and boasts 10 aperture blades for smooth bokeh. Its close-focusing distance is 34cm, with a magnification of 1:4 (an equivalent of 1:2 in full-frame terms), for light macro-light capability.

However, one of the headline features next to the super-wide aperture is the fact that the lens has a de-clicking mechanism. This means that the aperture can open and close silently, and it can operate steplessly for granular and gradual irising – both of which make it ideally suited to videography, giving filmmakers a very useful low light and shallow depth of field lens.

While it remains positively tiny compared to f/0.95 monsters like the Nikkor Z 58mm f/0.95 Noct, it is the largest and heaviest of these Voigtländer primes, measuring 87.7mm in length (with a 82.5mm diameter) and weighing in at 860g.

The 7 fastest lenses in 2020 – break the speed limit with glass as fast as f/0.75
The best Micro Four Thirds lenses in 2020: lenses for Olympus and Panasonic
Blackmagic Pocket Cinema Camera 4K review