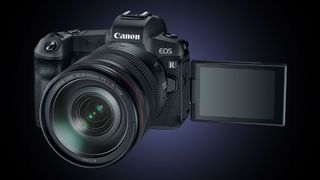 Just a couple of weeks ago, Sony had the full frame mirrorless camera market to itself. But now two of the biggest camera names in the industry have joined in to set the scene for an epic three-way battle. First it was Nikon with its mirrorless Z6 and Z7, and now Canon with its all-new EOS R system.

So let's take a close look at the EOS R, its features, its technologies and where it stands in relation to the rest.

01. What Canon was aiming for

This is almost identical resolution to the Canon EOS 5D Mark IV DSLR, and significantly lower than the 42.4 megapixels of the Sony A7R III and the 45.7 megapixels of the Nikon Z7, both of which are key rivals. The sensor also has a low pass filter.

Canon’s most advanced autofocus system to date offers up to 5,655 manually selectable AF points, though the actual number will depend on the camera mode and settings, and the lens used. Canon claims world’s fastest AF (for a full-frame mirrorless camera with hybrid on-sensor phase/contrast AF) of just 0.05sec with the RF 24-105mm F4 L IS USM lens. It also offers sensitivity down to -6EV with the RF 50mm f/1.2L USM.

Canon is sticking with its lens-based IS Image Stabilization system, whereas Sony and Nikon’s full-frame mirrorless cameras have in-body stabilisation working in conjunction with lens-based stabilisation (where provided).

It has the same 54mm width as the existing Canon EF mount but with a shorter 20mm flange-sensor back focus distance. This allows optical designs with larger rear elements and improved performance. It includes a new 12-pin connection for enhanced communication and power transmission with the camera body.

All RF lenses will include a customisable control ring for adjusting aperture, shutter speed, ISO or exposure compensation, and if you choose the EF-EOS R control mount ring adapter (below) we presume this will extend this control to regular EF and EF-S lenses.

Three adaptors will be available including a regular EF-EOS R mount adaptor (£99.99/ €119.99), an EF-EOS R control mount ring adapter (£199.99/€239.99) and an EF-EOS R drop-in filter mount adapter. The lack of support for lenses from Canon’s other mirrorless range is somewhat ironic but presumably caused by flange/mount distance issues.

This is ideal for sports or stage performances where absolute quiet is essential, but only available in for single-shot shooting, which could reduce its usefulness.

There are no dramatic innovations here. The EOS R can capture 4K UHD at 30p, 25p and 24p with intra or inter frame compression at 4:2:0 8-bit quality. You can shoot with Canon Log for up to 12 stops of dynamic range, and it does support 10-bit 4:2:2 output to an external recorder.

Like the new Nikon Z7, the EOS R has a single card slot rather than the dual slots we’re used to seeing on higher-end cameras. Canon has stuck to the conventional SD/SDHC/SDXC card format and the slot is UHS II compatible.

Canon quotes a battery life of 370 shots from the EOS R’s LP-E6N lithium-ion cell, but the camera does support USB charging when you’re out in the field and there will be an optional BG-E22 battery grip.

The EOS R has an OLED EVF with a resolution of 3.69 million dots, 100% coverage and a magnification of 0.76x with a 50mm lens focused at infinity, putting it on a par with its main rivals.

Round the back there’s a 3.15-inch touch-sensitive screen with a resolution of 2.1 million dots. It’s fully articulating with a hinge at the side, which gives it the edge over rival Sony and Nikon mirrorless models which offer tilting screens only.

This uses a reversed-out (white on black) display similar to the one on the Nikon Z7 and Fujifilm X-H1 to display key shooting and status information.

This is shaped like a rocker switch and mounted on the back of the camera just to the right of the viewfinder eyepiece. It’s a new feature which can be customised with a ‘slide’ or ‘touch’ action for ISO adjustment, for example, or other preferred settings.

DPP Express is a new tool for iPad users. It’s a raw image processing, viewing and editing utility for both the EOS R and EOS DSLR cameras. You import images via Canon’s Camera Connect and you can then adjust white balance, tone curve characteristics and dynamic range on the iPad.

The EOS R has been priced quite competitively and well below the price points for the Sony A7R III and Nikon Z6, so it could appeal strongly to amateur photographers and enthusiasts, not just professionals.