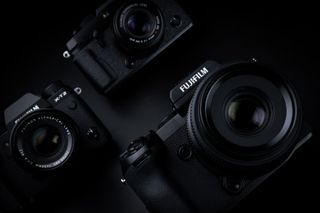 Camera makers know it's not enough to make great cameras, as they need a great lens range to back them up and tempt buyers into investing in the system. Many makers now publish lens roadmaps to let buyers know what's coming and convince them that the system is really going places.

But this is still a comparatively new system, and still very expensive to get into, so Fujifilm is very keen to convince users that there will be a proper lens system to go with these cameras.

The system is building up nicely. There are already three GF zoom lenses, which is itself quite a step forward for medium format cameras. Medium format zooms are big, rare, and not very fast, but while the GF 32-64mm F4 R LM WR, the new GF 45-100mm F4 LM OIS WR and GF 100-200mm F5.6 R LM OIS WR don't match the zoom ranges or maximum apertures of smaller format zooms, they are constant aperture zooms and they do between them cover a useful range.

Most of the GF lens range consists of prime lenses, however, and current models go from the GF 23mm F4 R LM WR up to the GF 250mm F4 R LM OIS WR. There are currently seven prime lenses to choose from, and the latest GF lens roadmap shows at least two more are coming.

The GF 30mm F3.5 R WR will arrive some time in 2020, and while we don't yet know much about this lens, it will have an effective focal length of around 24mm in full frame camera terms, making it a handy wide-angle prime.

The GF 80mm F1.7 R WR won't arrive until 2021, but the lens's claim to fame is its f/1.7 maximum aperture, which is pretty unheard of amongst medium format cameras – though Hasselblad does make an XCD 80mm f/1.9 lens for its X1D cameras.

Naturally, we'll update these lens roadmaps just as soon as we get any new information, but with the X mount lens range now looking pretty solid and the GF range building nicely, the future looks bright for both Fujifilm camera systems.

Current lenses that are already available for sale in the Fujifilm GF lens line-up are as follows:

We're all used to applying 'crop factors' to lens focal lengths to allow for different sensor sizes, but with medium format cameras it works in reverse – the sensor is larger than full frame, so lenses have a shorter effective focal length than the number suggests. The Fujinon 23mm f/4 R LM WR GF therefore corresponds to an 18mm lens in full frame camera terms, so it's an ultra-wide-angle prime perfect for landscapes, travel, architecture and interiors.

The GF32-64mmF4 R LM WR is one of three zoom lenses now available for the GFX system. Medium format lenses are larger than other types, and a medium format zoom is a rarity, so it's impressive that Fujifilm now has no fewer than three. The GF32-64mmF4 R LM WR has an effective focal range of 25-51mm, which makes it a wide-to-standard zoom lens with an unusual but extremely useful range.

This 45mm prime lens has an effective focal length of 36mm on a GFX body, so it's a classic semi-wide-angle prime lens for general use and street photography. The f/2.8 maximum aperture is modest by full frame camera terms but pretty fast for a medium format lens, and because you use longer focal length lenses on these larger cameras, the depth of field is more shallow – in bokeh terms, this lens is probably equivalent to a full frame 35mm f/2 lens.

The Fujinon GF 50mmF3.5 R LM WR is the smallest lens in the GFX lineup and the closest thing to a medium format 'pancake' lens – its size means it would make an ideal companion for the GFX 50R. It's equivalent to a 40mm lens in full frame camera terms, and weighs just 335g!

This is the closest thing to a 'standard' prime lens on the GFX format, with an effective focal length of 50mm and roughly similar depth of field to a full frame 50mm f/2 lens. The optical performance is superb, showing that Fujifilm has put all of its efforts into lens quality... which explains why these lenses are not cheap.

This is the second longest of the three GF format zoom lenses and offers and effective focal range of 36-79mm, so it's broadly equivalent to a standard kit zoom on other formats. The focal range isn't as wide (that's medium format for you), but this lens does have a constant f/4 maximum aperture, plus a further trick – optical image stabilization. The GFX 100 has in-body stabilization, but the GFX 50S and GFX 50R do not, so this is definitely a feature worth having.

This is the longest of the three zooms in the GF lens range, with an effective focal length of 79-158mm. The 2x zoom range is comparatively modest compared to full frame or APS-C lenses, but it does allow a constant f/5.6 maximum aperture – and this lens also has in-built optical image stabilization.

No, that's not a mistake. The Fujinon GF110mmF2 R LM WR really does have a maximum aperture of f/2, which is almost unheard of in medium format circles. With an effective focal length (in full frame terms) of 87mm – so it's a classic 'portrait' lens, and we think the f/2 maximum aperture should give similar background blur to an 85mm f/1.4 lens on a full frame camera.

Fujifilm is steadily filling the GF lens range with must-have lenses for pro photographers, and the GF120mmF4 R LM OIS WR Macro fills a need for macro and close-up photographers. With an effective focal length of 95mm, its in the classic 'macro' focal length range, offering high magnification and a good working distance from the subject.

This is currently the longest lens in the GF lens lineup, with an effective focal length of 198mm – so it's very close to a classic 200mm telephoto prime. The f/4 maximum aperture is impressive in a medium format lens of this focal length, and there's also built-in optical image stabilization so that none of that immense GFX resolving power goes to waste through camera movement.

Worried that the Fujinon GF250mmF4 R LM OIS WR (above) won't give you the focal range you need? The Fujinon GF1.4X TC WR fits between that lens and the camera body to offer a 1.4x increase in focal length, from 198mm to 277mm, with a one-stop reduction in the maximum aperture, which goes from f/4 to f/5.6 – still pretty fair for a lens with this focal length.

Chinese manufacturer Venus Optics claims the Laowa 17mm f/4 GFX Zero-D will be  the widest available native lens option for Fujifilm G-mount cameras, with a close-to-zero distortion optical setup and three extra-low dispersion elements to keep chromatic aberrations low. With an effective focal length (in full frame terms) of under 14mm, it's way wider than Fujifilm's own 23mm f/4 R LM WR GF, and the 'Zero-D' in the name stands for 'zero distortion', a promise Laowa's ultra-wide lenses have always lived up to in the past. We look forward to trying this one just as soon as we can get hold of a sample!