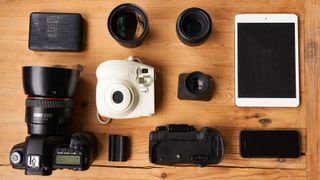 It’s a question we all ask ourselves at some point: what camera should I buy? Whether you’ve never used a camera before or you’re a seasoned professional considering moving to another system, deciding on which camera to buy isn’t always straightforward.

There are many reasons for this. First, it’s difficult to know whether to go for a DSLR, a mirrorless camera or just a good compact, as the last few years have seen huge advances in all three categories. Camera formats that were never considered to be ripe for a particular application are now potentially more suitable than more obvious choices.

Second, it’s not always clear whether you’d be served better by a camera from a brands whose roots are more in electronics rather than in photography. Many people will naturally be drawn towards Canon, Nikon and Fujifilm, rather than investigate what Sony, Panasonic and others have to offer, but every brand is worth considering as neither is better or worse than another; they simply produce different cameras that each have their pros and cons against their most immediate rivals.

Third, the decision to buy a camera often concerns more than just the camera body itself, as most cameras accept different lenses and accessories. Some systems, for example, have decades worth of optics behind them, which is great from the perspective of choice and price. Other systems are still developing, but the fact that these have been designed from scratch more recently may mean these lenses and accessories are better suited to modern cameras.

To help you decide on the best camera for your particular type of photography, let’s look at the main types of cameras and their pros and cons.

‘Point-and-shoot’ is a label attached to small, relatively affordable cameras, typically with limited manual control. They are designed for those who just want to leave all the big decisions to to camera itself, rather than take charge over things like aperture, shutter speed and so on.

This particular part of the camera market has taken a big hit from smartphones, which has caused manufacturers to focused their attention towards the pricier end of the camera spectrum, and leaving less choice. Still, there are good reasons for using these over smartphones, such as better handling and longer zoom ranges.

Pros: Small, affordable and relatively inexpensive, they’re great for when you just need something simple for general everyday snaps, where a smartphone may not do. The fact that they are so portable means you can take them where larger cameras may be more cumbersome.

Cons: They won’t perform as well in low light as more expensive cameras, partly because of the small sensor but also because the aperture of the lens will typically be small. They are often limited in terms of the control you have over images and video, and you won’t get things like a viewfinder or a proper grip for good handling.

Ideal for: Kids or anyone who find camera technology confusing.

Superzoom compacts are similar to point-and-shoot compacts, only with a lens that can cover a great range of focal lengths. So, you’ll be able to zoom further to capture subjects far away, but still be able to capture wide-angle views.

These cameras also typically offer more manual control over your image and video capture, so you can get more creative. Many now have electronic viewfinders too, as well as tilting LCD screens and 4K video.

Pros: A huge zoom range means plenty of flexibility. Whether you want to capture everything right in front of you or pick out subjects in the distance, these types of cameras will let you go between these without fuss. Some are also small enough to squeeze into a roomy pocket.

Cons: Although there is one notable exception, these cameras typically still have small sensors, so they struggle to produce the same kind of image quality as enthusiast compacts, mirrorless cameras and DSLRs. To be able to squeeze such a huge lens into a small body, you’ll also typically have a small aperture at the telephoto end of the the lens, which can be limiting.

Ideal for: Holidays and travelling, or just as general walkaround camera if you find yourself needing a long focal length with any frequency.

Bridge cameras: the best of both worlds

Bridge cameras essentially bridge the gap between compacts and DSLRs. They combine relatively compact bodies with DSLR-like design, with a grip on one side and an electronic viewfinder. They’re typically much smaller than a typical DSLR, particularly when you consider how ambitious their lenses can be, and many examples are relatively inexpensive too.

Pros: Better handling than superzoom compacts and a massive zoom range. More expensive models may have 1in-type sensors, 4K video and generally more advanced feature sets, and some may een work with external accessories such as flashguns.

Cons: Most bridge cameras have relatively small sensors, so overall image quality won’t be up there with the typical DSLR or mirrorless camera (although in good light the differences are not significant), and the quality of electronic viewfinders can often be disappointing. Some of the finest cameras, while impressive, can also command four-figure prices.

Ideal for: As with superzoom compacts, these are ideal for travels and holidays, perhaps those who frequently use the longer end of the lens and that needs more control over their results.

Enthusiast compacts: those serious about shooting

These blend the small form of compact cameras with relatively large sensors and excellent optics. Build quality will generally be strong too, often using magnesium alloy for rigidity and low weight, and you’ll typically have things like 4K video, Raw shooting and an electronic shutter option for more discreet shooting. Many models also offer electronic viewfinders, which makes them ideal for those used to composing images more traditionally (and in harsh light).

Pros: Better image quality than the average compact camera in a body that’s still relatively compact and typically sturdy. In terms of having the latest tech, many models tick the same kind of boxes as mirrorless cameras. Some even have APS-C and full-frame sensors.

Cons: Large sensors and small bodies often means a limited zoom range, and some models will only have a prime (fixed-focal-length) lens. Many models won’t offer the same kind of handing as mirrorless cameras either, and most don’t have focusing systems designed for fast-action photography.

Great for: Occasions when a DSLR isn’t practical, but when you still need image quality to be better than that of the average compact.

Mirrorless cameras range from small, light and affordable options through to models that can used in place of the very best DSLRs. They offer the same kinds of sensors as DSLRs, which means that most offer essentially identical image quality, and as there are so many more manufacturers involved, the range of cameras increases at a far faster pace than with DSLRs.

Pros: As a fast-developing sector with many participants, this is typically where we see many new technologies first appearing. Fierce competition has meant that you can now get excellent value for money across all levels, particularly if you require features like 4K video recording, which are missing from many DSLRs.

Cons: Many systems are still significantly smaller than DSLR lines from the likes of Canon, Nikon and Pentax, and you won’t have as wide a range of lenses to choose from. Battery life typically isn’t as good as on equivalent DSLRs, and there’s also the risk that some systems will be discontinued if they do not gain enough traction.

Great for: Those needing great image quality and portability, that prefer to have the ability to change lenses.

Read more: Our pick of the best mirrorless cameras

Mid-range DSLRs: for those who want to step up

DSLRs with APS-C sensors sit at the more affordable end of the spectrum. In many cases they accept the same kinds of lenses that were used for film SLRs but manufacturers are still very much involved in releasing new and updated options.

The ability to use such a range of lenses makes them ideal for an extensive range of applications, from macro and landscapes to portrait and sports. They also typically have much better battery life than mirrorless cameras and compacts at the same price point.

Pros: Lots of lens options, lightweight bodies and reliable image quality mean that they continue to be one of the most obvious choices for novice and enthusiast photographers.

Cons: Only Canon, Nikon and Pentax are still producing these, so things tend to move slower here than they do elsewhere. In terms of value for money, mirrorless cameras generally manage to offer

Great for: Anyone looking to take photography more seriously after using a smartphone or more basic compact camera. Also ideal for anyone who prefers to use a ‘real’ optical viewfinder, rather than an electronic version found on mirrorless cameras and compacts.

DSLRs with full-frame sensors, or simply full-frame DSLRs, continue to be some of the most desirable types of cameras for enthusiasts, and are the most popular type of camera among many professional photographers.

They combine a large sensor that offers very high image quality with plenty of manual control, together with access to decades’ worth lenses for maximum flexibility and the support of many accessories, such as flashguns, adapters and teleconverters.

Pros: Plenty of lens options, together with their easy-to-handle form and great image quality mean that they tick all the right boxes for the more demanding user. and their design provides great support for longer, heavier or just generally more exotic lens options.

Cons: Full-frame DSLRs are still somewhat expensive, and lack some of the niceties of mirrorless full-frame alternatives. Some photographers find their bodies to be larger than equivalent mirrorless options too, although the difference is smaller when comparable lenses are mounted.

Great for: Anyone progressing from an APS-C DSLR, or with a collection of older lenses that they may want to continue using. Full-frame DSLRs are great all-rounders, and manufacturers put a lot of effort into making these perform to a high standard, so you’re unlikely to be disappointed.