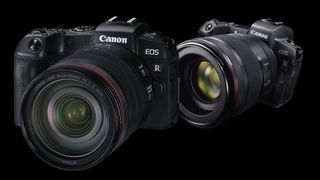 Back when Canon introduced the EOS R in 2018 everything was simple. This was the only full-frame mirrorless EOS you could buy so you didn’t have to agonise over specs, features and prices.

But now that Canon has introduced the cheaper EOS RP it’s introduced a lot of questions. The EOS RP is a much cheaper entry point into Canon’s new EOS R system, but will you sacrifice too many features compared to the EOS R? Which is the best Canon camera?

So we’ve broken down all the key specifications and differences to examine them one by one to help you decide which is best for you; the Canon EOS RP or the Canon EOS R.

Both cameras have full-frame CMOS sensors, but the EOS R has slightly higher resolution at 30.3 million pixels versus 26.2 million pixels in the EOS RP. It’s a small difference that’s not terribly significant on its own. The EOS R brings other enhancements and features too, but if outright resolution is all you’re interested in, the EOS R’s advantage is fairly marginal.

Winner: Canon EOS R thanks to its small resolution advantage

It’s not just the sensor that affects a camera’s performance but its image processor too, and here the playing field is dead level. The EOS RP and the EOS R both have Canon’s latest DIGIC 8 image processor and, interestingly, they both have the company’s DLO (Digital Lens Optimizer) feature for enhancing fine detail in images shot with Canon lenses.

With the same processor and similar resolution, it’s perhaps no surprise that the EOS RP and the EOS R offer the standard ISO range of 100-40,000, expandable to ISO 50-102,400. We’re quite pleased that Canon has not reduced the maximum ISO of the EOS RP to keep it below the EOS R.

Keeping with the similarities, the EOS RP and the EOS R both use a 384-zone Evaluative metering system, supplemented by Partial, Centre-weighted and Spot metering options. Neither camera supports linking the spot metering point to the AF point, but both offer anti-flicker shooting for more reliable results under artificial lighting.

Even the storage systems are identical. The EOS R has come in for some criticism for having just a single SD/SDHC/SDXC memory card slot, but it is UHS II compatible, so while it doesn’t take the new super-fast XQD/CFexpress cards been introduced by other brands, it should still be quite fast enough – and the EOS RP shares the same UHS II compatibility.

The image stabilisation systems are the same too. Neither camera has in-body image stabilisation (though Canon is reported to be working on such a system) so both rely on lens-based IS. The EOS RP does offer Digital IS for movies, which is not mentioned in the EOS R’s specifications, though the EOS R is better adapted to professional video use as we’ll see shortly.

Now the differences start to emerge. The EOS RP has a shutter speed range of 30-1,4000sec plus B, while the EOS R offers 30-1/8000sec plus B. That 1/8000sec shutter speed on the EOS R is not something you’ll use every day, but indicates a more advanced shutter mechanism and some conscious differentiation between this camera and the cheaper EOS RP.

The differences become more pronounced with the autofocus system. Both cameras offer Canon’s on-sensor Dual Pixel CMOS AF, as we’d expect, but while the EOS R offers 5,635 selectable autofocus points, the EOS RP’s total is slightly lower at 4,779 AF points. Both are huge numbers, of course, and in other respects these cameras look evenly-matched, both offering 88% horizontal and 100% vertical coverage.

But there are some important differences. The EOS R can focus in light levels down to -6EV, while the EOS RP is slightly behind at -5EV. The EOS RP hits back, though, with what Canon claims is now the world’s fastest AF speed of 0.05sec and, more importantly, the inclusion of Eye AF. We hoped the EOS R might get this too in its recent firmware update, but that didn’t happen.

While the EOS RP sneaks ahead in a couple of areas, though, it has a major drawback for videographers – Dual Pixel CMOS AF is not available when shooting 4K video. For static videographers who prefer manual focus that might not be a problem, but for vloggers and journalists this could be a major drawback that forces them to drop the resolution to full HD, where Dual Pixel CMOS AF is available.

That’s not the only difference between these two cameras’ video features. Both apply a heavy crop to 4K video footage, which does offer similar framing to the Super 35mm movie format but is unpopular with those who want full sensor width capture and no changes to the effective focal length of their lenses.

Regardless of that, the EOS R offers slightly faster 30p 4K UHD video against the 25p maximum of the EOS RP – and, of course, the Dual Pixel CMOS AF remains available, which is likely to be a far more important point  to videographers.

While these two cameras might look quite similar on paper, there are some quite severe restrictions on the EOS RP’s video capability compared to the EOS R.

The EOS R is also a more powerful tool for sports and action photography. The EOS RP offers a pretty modest 5fps continuous shooting speed, and this drops to 4fps with AF Tracking enabled. The EOS R is much faster at 8fps, though speeds take a bigger hit if you use AF Tracking, dropping to 5fps.

The buffer capacities are similar. The EOS RP, with its lower resolution images, can keep shooting JPEGs until the memory card is full, or 50 raw files in a burst. The higher resolution EOS R is limited to 100 JPEGs (still plenty) and can capture 47 raw files or 78 images in Canon’s new and more efficient C-RAW format.

The EOS R has been designed more for handling than compactness, and it’s not just wider, taller and fatter than the EOS RP, it’s also 175g heavier. But small size and light weight aren’t everything. While the EOS RP is small, many of Canon’s RF lenses are not, and we’re willing to bet that the EOS R will feel a better-balanced camera with many of these new lenses.

Quite apart from the operational differences, there are big physical differences between the EOS RP and the EOS R. The EOS RP is a much smaller camera, but Canon has still found the space to include a regular mode dial – a feature missing on the EOS R. What the EOS R does have is Canon’s clever/controversial Multi-function Touch Bar, and a useful top-mounted status display for camera settings.

Winner: Close, and down to personal preference

You’d expect Canon to look for places to save money on the EOS RP, and the viewfinder is one place where this has happened. It’s 0.39-inch OLED EVF has a reasonable resolution of 2.36 million dots and offers 100% coverage with 0.7x magnification. The EOS R, however, has a larger 0.5-inch OLED EVF with 3.69 million dots, the same 100% coverage and a larger 0.76x magnification.

The EOS R also has a better rear screen. Both cameras have vari-angle touchscreens, but where the EOS RP makes do with a 3.0-inch 1.04 million dot display, the EOS R has a larger 3.15-inch screen with 2.1 million dot resolution. Quite often it’s not one single feature that helps you choose one camera over another, but a steady accumulation of small advantages like this one.

Battery life is another area where the more expensive EOS R wins. Its LP-E6 battery has the capacity for 370 shots, which is only average compared to rival full-frame mirrorless cameras, but well ahead of the meagre 250 shots you get from the LP-E17 battery in the EOS RP.

There’s a bit of a sting in the tail with the connectivity features too. Both cameras have Wi-Fi, microphone and headphone sockets, HDMI output and USB ports – but where the EOS R supports USB 3.1, the EOS RP makes do with old-tech USB 2.0. That might not be a problem if you use a card reader, but could be real drag if you use USB for image/video transfer.

We’ve saved perhaps the most important factor till last – price! The EOS R is currently on sale for £2,349/$2,249 while the EOS RP is massively cheaper at £1,399/$1,299. These prices are body only but right now retailers are tending to include an EF mount adaptor in the package.

Winner: Canon EOS RP, by a margin that surprises even us

There’s a lot to weigh up when choosing between the EOS RP and the EOS R. Is the EOS R worth all that extra money? Do you lose too many key features when you ‘downgrade’ to the much cheaper EOS RP?

If you just want to dip your toe into the full-frame mirrorless camera market and you’re a stills photographer rather than a video specialist, the EOS RP is almost as good at a massively reduced price.

But if you’re a pro photographer and/or videographer, we think the extra performance and features of the EOS R will soon make you forget how much extra you paid for it. You can save a lot of money with the EOS RP, but you might regret your cheapskating for a long time to come.