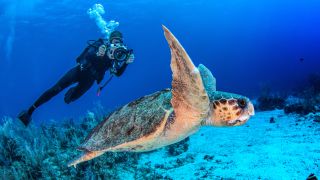 Why might you need the best waterproof housings for cameras? While it’s true that there are many great waterproof cameras out there, many of which can sink to impressive depths, waterproof cases and housings still have an edge for a number of reasons. What's more, with the best underwater housings for phones you can also not take your iPhone or Android smartphone snorkelling or scuba diving.

First, there’s the issue that many waterproof compacts are not terribly sophisticated as far as camera tech goes. They tend to have smaller sensors than the best mirrorless cameras and the best DSLRs, and lack advanced imaging features such as high frame rates, sophisticated autofocus systems and high-quality 4K video.

This also works in the other direction – if you do all your snapping on one of the best smartphones for photography, or something relatively inexpensive like one of the best GoPros, it makes sense to pick up a cheaper housing for your device, as this will likely set you back less than a dedicated tough camera.

That’s why we’ve split this guide up into sections to cover all bases. First we’ve selected some of the best underwater cases for iPhones  and smartphones. Next we’ve listed some “shallow-water” housings for cameras and GoPros, which will allow you to capture images in relatively shallow water without breaking the bank. Lastly, we’ve selected a couple of the best pro cases for deep sea scuba diving. You can click the sub-headings below to navigate to your preferred section.

Protective underwater cases for phones can vary from simple pouches to more robust cases that are tailored to individual models. When picking a good underwater case for a phone, make sure it will also allow you full operation of the touchscreen, so that you’ll be able to shoot to your full ability without compromising the waterproofing.

While GoPros and other action cameras will be waterproof up to a point, dedicated housings allow you to take them much deeper than you would otherwise, making them a good choice for snorkelling and shallow diving alike.

Being able to shoot with your smartphone in a pool or shallow patch of sea without worrying about splashes or accidental submerging is great fun – and a great choice for this is the Frē Series of cases from LifeProof. The company makes lots of custom-fit cases for individual smartphone models, both iPhone and Samsung Galaxy models are covered so there are loads to choose from (check to specs to see if one is available for your handset). The cases are also shockproof and generally dirtproof, making them just a solid peace-of-mind buy for travel. Underwater-wise you only get protection guaranteed for depths of up to 2m, and that’s only guaranteed for an hour, so bear this in mind before buying.

A cheap and cheerful smartphone pouch that works well, as long as you’re careful

While many of the housings on this list can be quite pricey, if you’re after a real bargain then we’d recommend this pouch from JOTO. Styled as universal, it’s a straightforward product that will work with pretty much any smartphone that physically fits inside it. Once you’ve sealed the clamps (and it pays to double-check, here) then your phone will be protected down to about 30m of water, and you’ll be able to take pictures through the clear window on both the front and rear sides. Some users report some difficulty using the touchscreen so it may take a few tries, but if you’re after a bargain underwater case, this is unbeatable.

Here we’ve picked out some of the best dedicated cases for DSLRs and mirrorless cameras that work in shallower waters. These aren’t the choice for deep-sea diving, but for snorkelling and shallow-water shooting with your camera, they’ll work perfectly. Bear in mind also that there are lots of different models for different types of camera, and space doesn’t permit us to cover them all, but both Dicapac and Ewa-marine – the makes we’ve chosen for this section – produce many different housings, so if your camera doesn’t fit the model listed, it’s worth heading to the website to find one that does.

Suitable for: Small and medium DSLRS, with lenses up to 15cm long | Maximum depth: 5m

Dicapac makes a whole host of straightforward underwater bag-style housings for DSLRs and mirrorless cameras, and they’re significantly more affordable than comparable pro housings would be. This one even has enough space for zoom lenses like a 24-105mm to be used (though this extra space does make it fiddly if you want to use a shorter lens), and is compatible with enthusiast DSLRs like the Canon EOS 7D Mark II. While it has strategically placed holes to allow the user to operate the DSLR’s controls, some users have experienced trapped air in the bag making it hard to operate. Still, once you get used to its quirks, this is an impressive piece of kit.

If you’re using a smaller mirrorless setup, it’s worth seeking out a dedicated mirrorless housing, as this will make operation of the camera much easier once you’re underwater. The D-B from Ewa-marine, for instance, features a glove-like finger orifice that allows easy access to the controls of a mirrorless camera, making it that much easier to nail the shot even underwater. Autofocus and flash should still work well enough to be useable, and the bag is specifically designed so that the camera won’t be affected by the increased pressure of the water – this is why you want to make sure there is a little air inside the bag, as opposed to other similar housings where you generally want to expunge it.

Extend the waterproofing of the GoPro Hero8 Black from 10m to a whopping 60m with this dedicated housing. It also includes a “skeleton backdoor” which provides access to the touchscreen and improves audio capture, and according to GoPro, a camera with this housing equipped will still produce reliably sharp images above and below water. Be aware that this is suited to the Hero8 only – if you use an older model then try the GoPro Super Suit, which fits most GoPros from the Hero7 Black to the Hero5 Black. Other housings are also available for other action cameras, such as this Solidpin housing for the DJI Osmo Action, so if you’re not a GoPro user, it pays to shop around.

Finally, we come to the housings designed to take pro-spec cameras into deeper waters. These are serious housings for serious cameras, and as such they command serious prices. But if you’re looking for the best and can accept no substitute, these are definitely the housings to pick, with full access to camera controls and a sophisticated build that ensures images and videos are beautifully sharp.

Diving with chunky DSLRs and short-ish lenses? This is the housing to pick

Another housing from Ewa-marine, the U-BXP is designed specifically for pro-spec DSLRs like the Canon EOS-1D X Mark III or the Nikon D5, and will carry them safely down to depths of 50m. If you want to dive more easily, it’s also possible to attach an optional BF1 lead weight, which any diver will tell you can make the descent much smoother. Controls are easily accessible, and the lens window is made from high-grade mineral glass to ensure top-notch quality. It’s designed for use with relatively short lenses with a filter diameter of less than 72mm – if you use larger lenses than this, it’s worth considering the Ewa-marine U-BXP 100 or Ewa-Marine U-BZ100.

Ikelite’s housings are probably the best deep-water camera protection out there right now. The 200DL can be purchased for the Canon EOS 5D series, the Sony A9 Mark II, the Fujifilm X-T4 or any number of other mirrorless and DSLR cameras you’d care to name, past and present. Its Dry Lock Port system provides superlative security underwater (though does require the additional purchase of the Lens Port), and the unique zoom gear system of the housing makes it easy to use zoom lenses. There’s even the option to use the included Ikelite ICS-5 bulkhead connector with manual hotshoe for triggering underwater strobes, providing a new dimension to your underwater shooting. These are the best housings around.