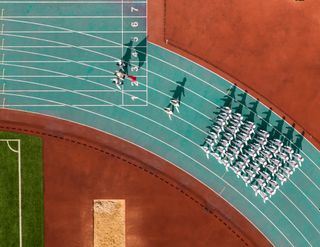 It’s that time once again: the Sony World Photography Awards prepares to hand out its annual gongs for the best of the best in the photography world.

With open and professional competitions, in fields ranging from architecture, wildlife and nature to contemporary issues and more, the shortlist is always a diverse collection of fantastic imagery.

You’ll have to wait until 19 April to find out who picked up the ultimate prizes, but in the meantime we’ve put together a gallery of some of the shortlisted images to whet your appetite. Click through to look closer, and head to worldphoto.org for more about the competition.

"Hamburg, Germany. Spring of 2017. The most graceful lady of her neighbourhood, despite the burden of old age. Always stylish, colourful, in good spirits, smiling, never complaining, even though the everyday is a struggle and a challenge for her. And never to be seen without her best friend – her little dog."

"A view of Torano’s "marble valley" in the Apuan Alps, one of Italy’s most marble-rich area, where the abundance is surreal. What we admire as pristine white stone was born hundreds of millions of years ago in overwhelming darkness. Countless generations of tiny creatures lived, died and drifted slowly to the bottom of a primordial sea, where their bodies were slowly compressed by gravity, layer upon layer, until eventually they all congealed and petrified into the interlocking white crystals we know as marble. Some eons later, tectonic jostling raised a great spine of mountains in southern Europe. Up went the ancient sea floor. In some places they rise more than 6,000 feet."

"Taken at the outskirts of Hong Kong, this large residential area is supposed to resemble North American type suburbs, with individual homes and even yellow school buses. However, this large lake in the center of it all may have been designed a particular way, which can only truly be recognized from above."

"The first time I was injured was a year after I went underground. Five bullets in my foot. I was living in the forest with a few others, all young kids. We were busted in the forest by the NKVD, the People's Commissariat for Internal Affairs. There were five of us and they fired at us. I got hit then, in my left foot. I wanted to blow myself up with a grenade so they wouldn't take me alive, but once I realized I could still walk, I threw the grenade in the direction they were shooting from and ran with the others. They fired more shots, blindly, but didn't hit anyone else and we were able to escape."

"Lumane Casimir, in Haiti, is, an example of the cacophony and the problems that prevail the reconstruction in the country: lack of housing, corruption, vagueness in administrative management, disengagement from the state, ill-conceived and badly managed humanitarian projects, natural resources destroyed. On this project of 3000 houses, only half have been built. Each years I photographed this village to show how it change or not. Story between 2012-2017."

"Ilona at home with her daughter, Michelle, 4, Moscow, 2012. Ilona’s sweater was produced for her in a custom color by her friend Andrey Artyomov, whose Walk of Shame fashion line is popular among the wives of oligarchs."

"Kazakhstan entered to the independence probably with the most damaged natural environment among the former federal states of the USSR. The excessive use of water from Syr Darya for irrigation of farmlands affected to the disappearance of the Aral Sea, plowing millions of hectares of chernozem, triggered wind erosion, which led to unprecedented degradation of soils, while the Semipalatinsk area became famous for nuclear tests and related contamination of the region. For years, the authorities have been trying to change the negative image of Kazakhstan, promoting; among others; its natural attractions. It takes a special form in Almaty, the former capital of the country, where many construction areas are decorated with sheets depicting landscapes of Kazakhstan. It creates a kind of dissonance with the perception of the country, as well as with the fact that actually Almaty is one of the most polluted cities in the world. Crumpled, dirty sheets say a little more about the country than the originators could have predicted."

"In China, new senior middle school students would have their military training at the beginning of the first year's school term. We all have memories during everybody's training time. I helped a school to shoot for the record of their training time in September 2017."

"A young white rhino waits in a boma, blindfolded and partially drugged after a long journey from South Africa, before being released into the wild in Botswana as part of efforts to rebuild Botswana's lost rhino populations. Botswana is saving rhinos from poaching hotspots in neighbouring countries and translocating them to re-establish the populations of rhinos it lost to poaching by 1992."

"A woman has sparked a backlash after she took a picture of a dead man in his coffin then posted it on Facebook. The unnamed woman took a sheet off the body of Michael Dene Ray, 21, at a funeral parlour. She then put a friendship bracelet – identical to the one she and another person were wearing – on his wrist and took a picture of their arms next to one another. The woman then put the image on Facebook as a ‘tribute’ to him. It has since been taken down after Michael Dene’s family learned that friends were planning to wear a T-shirt featuring the offending image at a party to celebrate his birthday. Now the man’s family has reacted with anger and want tighter controls at funeral parlours. Michael Dene died on 21 December last year and a coroner later ruled his death was as a result of suicide. The family has started a petition calling for it to be made illegal to take pictures in funeral homes without the consent of the next of kin."

2015, Asakusa, Tokyo. Women from the group during the Sanja matsuri (Japanese festival)

"This is a project I started 4 years ago about women in the Japanese mafia. I decided to gain access into the Yakuza organisation to try and find out what the women’s role is in this little-known organisation. I tried to enter this underworld through different doors, from the nightlife in the red light district, to hostess bars. For a short period of time I even became a hostess myself in order to have a better understanding of their way of thinking and to respect their identity. After many months of trying to infiltrate the Yakuza, I had a fortuitous meeting, and was authorised by a boss to photograph the organisations daily life. This project is about my personal journey through this underworld."

"Every day, before sunset, thousands of Palestinian workers spend between 2 and 4 hours clumped together to cross the so-called "CheckPoint 300", that divides Bethlehem and Jerusalem, in order to go working in Jerusalem and surrounding areas. The images presented are realized with instants taken from more than 30 different pictures realized at CheckPoint 300, and the purpose of the series is to represent the inhuman conditions in which these people are forced daily to get their right for a job. If these images are result of a creative composition, hence not real, what is real is the sense of oppression that they aim to represent."

"I do not remember anything about the ceremony of circumcision, I was not even a year old. About what it did to me, I only found out when I was older. I remember that I was so upset and offended by my mother, when I found out, that I did not talk to her for a very long time. I already knew by then that it was bad. We were told about this in school. I'm glad that today the operation is banned.

I myself could not do without the consequences - my stomach often hurts, and the doctor says that maybe it's because of circumcision. But I was lucky compared to my younger sister - she was constantly experiencing pain during urination and did not go to school for months. Everything was so bad that Mama herself decided not to do the operation to my other sisters."

"How often have you not passed a dog and its owner on the street thinking 'Wow! No wonder those two found each other!' Well, I have, and wanted to document this phenomenon, and searching dog shows with a makeshift studio, I found the myth to be (partially) true."

"The Roar. An intense occurrence of Red deer taken during the annual breeding season on the North island of New Zealand. I was commissioned to record the essence of stag (males) behavior during the peak roar. Stags are most vocal and have a very distinct roar sound when attracting hinds (females). Stags establish dominance during the roar by not only vocalizing their superiority but also displaying forms of mature postures and often fighting with competing stags to mate with hinds. Being able to safely document large, antlered, wild, and aggressive stags has taken years of practice and patience. Witnessing intense, raw moments, for a brief time, ultimately provides a better understanding of red deer behavior; the essence of The Roar."

"Rasidatou and Latifatou, 4, pose for a portrait on a street in the Koumassi district of Abidjan, Ivory Coast on July 25, 2017.

It is a belief that is centuries old in Ivory Coast, and in several countries of West Africa, that twins have spiritual and mystical powers. When in need for a problem to be solved or for a positive change to happen, people often come to twins, donate to them and seek for a blessing, with the hope that the power of the twins will help their wishes come true."

"The stylish Emile shot for Paypal looking suitably aloof and hoity in a set with just a little nod towards Wes Anderson."