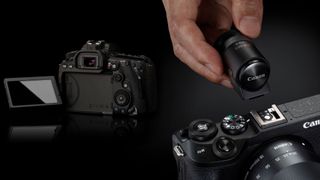 On the face if it, Canon has just launched two cameras with the same sensor – the Canon EOS 90D and Canon EOS M6 Mark II. These cameras feature a brand new and very exciting 32.5MP sensor that immediately takes these cameras to the top of the chart for resolution amongst all APS-C cameras, both DSLRs and mirrorless.

We haven’t tested them fully yet, so we can’t say if they will go straight into our lists of the best DSLRs you can buy right now and the best mirrorless cameras, but they do look like major contenders and we do have a Canon EOS 90D hands on review and an EOS M6 Mark II hands on review.

But which one should you choose? There’s this idea that DSLRs are on the way out, and the EOS M6 does offer the same sensor and the same new uncropped 4K video capability as the EOS 90D, as well as being both cheaper and lighter. For different reasons, they look to set to be amongst the best Canon cameras to get right now.

However, it’s not as simple as it looks. The EOS 90D has some important features and qualities which aren’t obvious if you just look at the headline specs. So here’s a detailed Canon EOS 90D vs EOS M6 Mark II breakdown that paints a much more interesting picture.

The Canon EOS 90D and EOS M6 use the same 32.5MP APS-C CMOS sensor, so there are no differences here. This is some way clear of the next-highest resolution APS-C cameras from Fujifilm, the 26MP X-T3 and the X-T30 and well clear of the bulk of the APS-C camera field at 24MP.

Again, there’s no difference between these cameras in their processors either. Both use Canon’s latest DIGIC 8 processor, and although processor technologies are probably one of the less exciting aspects of camera design, they are important. In this case, the new-found processing power will be the key to handling these cameras’ higher-resolution stills, uncropped 4K video and high continuous shooting frame rates.

There’s no difference here, either, and we wouldn’t really expect it. Both cameras have an ISO range of 100-25,600 in their standard ISO range and both can go up to ISO 51,200 in expanded mode. We don’t yet know what the quality is going to be like at these settings, but we’re not expecting to see any differences between the EOS 90D and EOS M6 Mark II’s results.

This is where the differences start. Being a DSLR, the EOS 90D has an optical viewfinder, and it’s a superior pentaprism type rather than the cheaper pentamirrors in DSLRs further down the range. It offers 100% coverage and 0.95x magnificatio. The EOS M6 Mark II, however, does not have a viewfinder at all. You can attach the clip-on EVF-DC2 electronic viewfinder, however. This is sold separately, but some retailers are offering it with the EOS M6 Mark II as part of a kit.

We’re used to mirrorless cameras having more advanced rear screens than DSLRs, or at least with a wider range of movements, but the tables are turned here. Both cameras have a 3-inch 1.04M dot touchscreen display, but on the EOS M6 Mark II it’s on a titling hinge, albeit with a 180-degree ‘flip’ so that it can face forwards for selfies and vlogging. The EOS 90D, however, has a full-articulating vari-angle display which you can angle in pretty much any direction you like, including sideways.

Both cameras use Canon’s on-sensor Dual PIxel CMOS AF system. The EOS M6 relies on this entirely for both live view shooting and viewfinder photography (if you have a viewfinder attached). The EOS 90D uses the same Dual Pixel CMOS AF system in live view, so it’s just as effective as the EOS M6 Mark II for live view photography and autofocus for video. Being a DSLR, however, the EOS 90D also has a separate phase detection AF sensor for viewfinder shooting. This offers 45 cross-type AF points and Canon’s iTR focus tracking. We haven’t tested these cameras for their continuous AF abilities yet, but this could be a significant point of difference.

You might expect the EOS 90D to be faster at continuous shooting too, but here the advantage swings back to the EOS M6 Mark II. The EOS 90D can capture images at 10 frames per second, which is very good indeed for a camera with this resolution, but has a pretty modest buffer capacity of 58 JPEGs or 25 raw files. The EOS M6 Mark II is faster, with a maximum shooting speed of 14fps, though with a slightly smaller buffer (thanks to the higher speed) of 54 JPEGs or 23 raw files – though it can capture 36 smaller CRAW files. The EOS M6 Mark II also has an intriguing 30fps RAW mode which we don’t know much about, except that it appears to be full automatic (it is on the Canon PowerShot G5 X Mark II) and not really an alternative to regular continuous shooting.

Both cameras have identical video specifications, capturing uncropped 4K UHD video at 30p or 25p, and both use Canon’s Dual Pixel CMOS AF system for live view AF while filming. If there is an advantage, you might expect it to lie with the mirrorless EOS M6 Mark II. In fact, it’s the DSLR that has the edge. The EOS 90D has a fully vari-angle LCD display, and while both cameras have microphone ports, it’s only  the EOS 90D that has a headphone port for monitoring audio levels.

It’s another win for the EOS 90D for built in flash. Both cameras have a flash built in, but where the flash in the EOS 90D has a modest but effective Guide number of 12 at ISO 100, the flash in the EOS M6 Mark II is far weaker, with a Guide Number of 4.6 – you will have to ramp up the ISO or use some very fast lenses to get much illumination out of this.

So now we’re on to batteries.... booooring! Except that it’s not. The EOS 90D can squeeze an extraordinary 1,300 shots out of its LP-E6N battery, while the EOS M6 Mark II can only scrape 305 shots from its LP-E17 cell. That’s not a small difference. The EOS 90D will last more than four times longer on a single charge for stills photography (we’d expect them to be the same for video, to be fair).

Not surprisingly, the EOS 90D is a lot bigger than the EOS M6 Mark II. The M6 Mark II might conceivably fit into your coat pocket; the EOS 90D certainly won’t. On the ohter hand, if you’re using longer/heavier lenses, you might be glad of the extra grip and balance provided by the DSLR body.

It’s another unsurprising win for the Canon EOS M6 Mark II. The EOS 90D is not exactly a heavyweight, but the EOS M6 Mark II is not much more than half its weight. Of course, if you add an electronic viewfinder and the optional EF-EOS M lens adaptor, the equation changes somewhat.

This is not the simple comparison it might first appear. The EOS M6 Mark II is smaller, lighter and cheaper than the EOS 90D despite having essentially the same tech and capabilities. But the EOS 90D has a number of small and not so small advantages that do add up – and its DSLR design does not stop it being just as effective as a live view/video camera as any mirrorless model.

• These are the best DSLRs you can get right now
• We pick the best mirrorless cameras on the market
• What's the best Canon camera? We pick our favorites