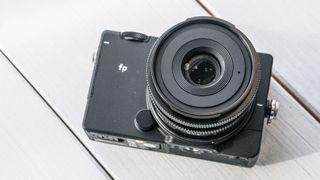 The Sigma fp will start shipping from Japan from October 25, and will cost just $1899 body only in the United States, and £1999 in the UK. The camera is Sigma's first ever full-frame mirrorless camera – and will use the same L-mount lens system as Leica and Panasonic are using for their full-frame cameras.

When originally announced Sigma had simply hinted at a price that was 'under $3000' - but in recent days it had been clear that the innovative camera would actually be much closer to $2000. The reality is that it will be well under the $2000 bar - thanks to the aggressive $1899 body-only price. But even more tempting is the US kit, which pairs the Sigma fp with the Sigma 45mm F2.8 DG DN Contemporary, which will be sold for a discounted price of just $2199.

Designed very much to be a modular system, where you choose viewfinders, grips and more to help set up the camera to suit your shooting - and to optimize for stills or video - the price of the nine Sigma fp accessories have yet to be announced (but you should probably budget for needing at least one of these).

Weighing just  370g and featuring a 24.6 megapixel Bayer full-frame sensor, the Sigma fp can shoot 4K. Unusually there is no mechanical shutter, but can output 12-bit CinemaDNG Raw video.

The fp marks the company's first camera since the Sigma SD Quattro H back in 2017, and represents a notable step away from Sigma's favored Foveon sensor technology (as seen in the Quattro H, which featured an APS-H sensor with a spatial resolution of 25.5MP, producing a supposedly equivalent 51MP resolution).

Sigma is still planning on a Foveon-sensored L-mount full-frame camera - which is promised for release in 2020.

Whilst shipping starts this month, Sigma UK are not expecting the fp to actually reach the shops until November or December.

Sigma fp hands-on review
Sigma fp is so small it literally fits in your trouser pocket!
L-mount lens roadmap: Panasonic promises 42 lenses by the end of 2020