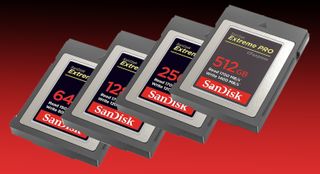 CFexpress memory card compatibility with the Nikon Z 6 and Z 7 is nothing new - Nikon made this possible with firmware version 2.20 last year, though only for Sony-branded CFexpress cards. Then in February this year with firmware version 3.00, compatibility was expanded to ProGrade and Lexar Type B cards. However, bugs were present requiring workarounds like the reinsertion of the card, or switching the camera off and on again.

In the case of SanDisk-branded CFexpress cards in Nikon Z cameras, Nikon Rumors reported some users having issues with camera lockups and errors, though these may have been confined to 64GB cards. Whatever the cause or specific products affected, it was clear there were persistent compatibility glitches with some SanDisk CFexpress cards used in Z 6 and Z 7 cameras.

But all seems to have been resolved, as Nikon Rumors has just announced that Z 6 and Z 7 cameras are now fully compatible with SanDisk Extreme Pro CFexpress Type B cards. There is slight catch though - this only applies to newly manufactured cards with a specific model number. Fully compatible cards apparently carry the model number suffix "xxxNN", whereas older cards that are not reliably compatible will have a model number ending in "xxxIN". This model numbering applies to all four capacities of SanDisk Extreme Pro CFexpress cards - 64GB, 128GB, 256GB and 512GB. Maximum read/write speeds remain the same at 1700MB/s and 1400MB/s respectively.

All this is further good news for Z 6 and Z 7 owners who, until the implementation of CFexpress compatibly, had little choice but to drop big bucks on XQD cards - a memory card format owned exclusively by Sony - and with no market competition, pricing remained high. CFexpress, on the other hand, is an open-source card format and looks set to be more competitively priced and the card format of choice for high-end cameras.

The best memory card for your camera