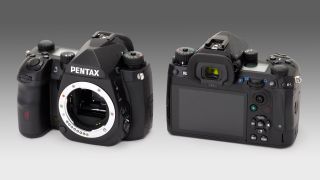 Ricoh Imaging has given us the first glimpse at a brand new flagship camera to commemorate its 100th anniversary. And, in the most Pentaxy move imaginable, it's an APS-C DSLR.

The camera is scheduled for launch in 2020, and will be exhibited at the Pentax Meeting 100th Anniversary Special event taking place in Japan on 21 September.

We know very little about the camera, not even its name, though the company may well reveal more details at its event. However, we can determine a few things from the official images.

The form factor looks like a cross between the Pentax KP and Pentax K-70, with a grip that is slightly less pronounced than the latter, but it's sleeker and more svelte than either predecessor.

It incorporates both a rear joystick and a top LCD panel, but its rear screen does not tilt or articulate. The gold "SR" on the front of the camera confirms that it will possess Shake Reduction image stabilization.

With regard to specs, it would be nice if Pentax could improve on the 24MP sensors in its existing APS-C lineup, though we may not see a massive jump the way we did with the 32.5MP sensor inside the Canon EOS M6 Mark II.

With Sigma abandoning the K-mount, the future prospects for cameras using the mount is a little less than rosy – and it's also symptomatic of the mirrorless curve that Pentax is willfully falling behind.

It was only a couple of months ago that Ricoh asserted DSLRs will make a comeback: "after one or two years, some users who changed their system from DSLR to mirrorless come back to the DSLR again."

It's certainly a far cry from Olympus, which celebrated its own 100th birthday earlier this year by releasing two mirrorless flagships (a limited edition silver Olympus OM-D E-M1 Mark II and an all-new Olympus OM-D E-M1X). So it's certainly brave of Pentax to stick to its DSLR guns, with what appears to be a dying mount, but Pentax wouldn't be Pentax if it did things any other way.