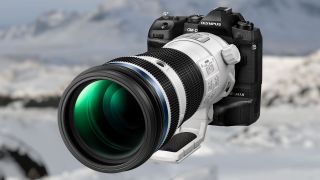 Shrugging off any gloom and speculation about its future following its sale to Japanese private equity firm JIP, Olympus has announced a whole raft of products and updates… but you can’t have them all just yet.

We have more news on the upcoming M.Zuiko Digital ED 150-400mm f/4.5 TC1.25x IS Pro, which means it will have been almost two years in the making since it was first announced early in 2019, but first there’s a new Olympus lens roadmap to digest.

We’ve reproduced a diagram of the new Olympus lens roadmap below, and there are two big points of interest.

The biggest is a new ED 8-25mm F4.0 Pro lens, which covers the equivalent of a 16-50mm focal range in full frame camera terms. In other words, it goes from seriously wide-angle to a standard angle of view, a new focal range which we can’t wait to try out because for travel and street photography it looks like a single lens that can do the job of two (a regular kit zoom and an ultra-wide zoom).

(We were equally excited by the announcement of the Panasonic Lumix S 20-60mm f/3.5-5.6 full frame L-mount lens for the same reason, and the M.Zuiko Digital ED 8-25mm F4.0 Pro will do the same for Olympus’s MFT cameras, but go even wider.)

The second new lens is a mysterious new macro lens somewhere in the 60-75mm focal range, or 120-150mm (approximately) in full frame camera terms. We don’t know anything else about this lens except that it will form a part of the Olympus Pro line-up.

This lens is still a long way off, considering we first reported on it back in March 2019. Olympus does say that the design has at least has now been finalised, but the lens won’t ship until winter 2020.

Why all the fuss about a telephoto zoom? Because the 2x crop factor of the Micro Four Thirds format means that this is effectively a 300-800mm f/4.5 lens. That’s not just a very powerful telephoto, but a very fast aperture for that focal range.

When you factor in the integrated 1.25 teleconverter, this takes the range up to an effective 375-1000mm, and still with a maximum aperture of f/5.6. No wonder we keep talking about this lens – if only we didn’t have to keep waiting for it too!

The Olympus OM-D E-M1X will get bird recognition

Also scheduled for winter release is a firmware update that adds birds to the list of objects which can be identified by the E-M1X Subject Recognition system.

This seems a long way ahead for a firmware update announcement, but Olympus is probably keen to reassure fans that development is pressing ahead and it’s planning long term for the future.

And now you can use your Olympus as a webcam

Lastly, Olympus has released a new webcam app which will let you connect your camera to your computer and use it like a webcam for streaming and video conferences, and it won’t require any hardware widgets, just a USB connection.

The software works with the Olympus OM-D E-M1X, E-M1, E-M1 Mark II, E-M1 Mark III and E-M5 Mark II. You simply download the free Olympus webcam software, connect the OM-D to your PC via USB, switch on the camera and set it to tethered mode, turn on a web conferencing application and select “OM-D Webcam Beta” in the app’s settings. Keep in mind, though, that this is beta software and not a finished product.

Much of this Olympus news relates to products which are still some way off, but it's encouraging for Olympus fans that the company is pressing on with new products and the development of the Olympus lens range.