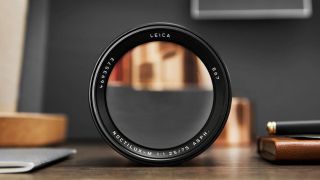 Leica has a long, proud history of telling anyone who’ll listen that its Noctilux lenses are the best of the best – and to be fair, the boast isn’t entirely unjustified.

Famous optics like the Noctilux-M 50 mm f/0.95 ASPH have deserved the acclaim heaped upon them – and today, the Leica Noctilux-M 75 mm f/1.25 ASPH, joins the lineup.

Made for M-mount, the lens comes with the heady promise of redefining depth of focus. Compatible with the Leica SL via an adapter, the Noctilux-M 75mm employs a precise optical design in order to produce sharply isolated subjects and vivid, unique bokeh, with its 75mm focal length making it a perfect partner for portraiture.

The lens is constructed of nine elements in six groups, and this includes two aspherical elements for edge-to-edge sharpness. Leica says it has only used glass with high anomalous partial dispersion and low chromatic dispersion characteristics in the lens’s construction, while a floating element keeps performance high at a range of camera-to-subject distances.

"Soft and harmonious" bokeh is produced by an eleven-bladed iris, and the lens also comes with an integrated, lockable hood for keeping away extraneous light (and to keep the front element clear of dust and dirt). Leica promises that the lens’s large resolving power should render it future-proof, in the sense that it will be able to cope with sensors with higher pixel counts than those in today's cameras.

Unsurprisingly given the Leica price tag (which we’ll get to), the Noctilux-M 75mm f/1.25 ASPH isn’t really aimed at people spending Sunday evenings photographing garden birds from a deckchair. In an interview on the Leica blog, Leica’s Head of Optics Development Peter Karbe says:

“The Noctilux-M 75mm f/1.25 ASPH ... is aimed at all ambitious Leica photographers with the expertise to utilise this creative potential for their visual expression, for example also in portrait photography, which represents the classic domain of this focal length. This target group also very much includes owners of the Leica SL. For one, the 75mm Noctilux and the SL are a very harmonious combination in terms of ergonomics. And secondly, the particularly brilliant viewfinder of the SL and its Focus Peaking feature make it much easier to position the focal plane within the image.”