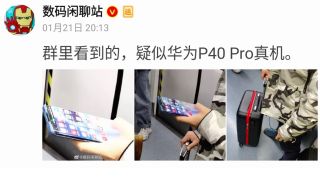 While the Huawei P40 Pro isn't expected to launch until March 2020, we may have just got our first glimpse of what looks set to be the second flagship Huawei is launches with no Google Services, after the US China trade war fallout. The images were originally shared on Chinese social network, Weibo, and reposted on GSMArena.

The question Huawei faced is this: how do you entice customers when you're already on the back foot? If the latest renders are accurate, the answer is: launch what could be the world's first 10x optical zoom smartphone camera.

As previously reported, renders of the P40 Pro, which appear to showcase the camera array in high resolution made it very clear,  the phones focal length will range from 18mm at its ultra-wide-angle, through to 240mm. These renders came from the renowned leaker evleaks, who's unofficial previews have historically been on the money.

This latest series of photos seem to corroborate what we know. Despite the snapped phone encased in a housing that's meant to disguise distinguishing features, key elements can be identified - the phone features a curved display, almost certainly OLED and the flaps around the back match the rectangular camera housing shown off in the renders, which happens to look very similar to that of the Samsung Galaxy S20, expected to launch on February 11.

Whether or not the P40 Pro is the first 10x zoom camera phone, or even sees a western release remains to be seen. Between now and its expected launch in March, we have MWC 2020 to look forward to, during which Oppo, Sony and Xiaomi will likely be launching devices to go toe-to-toe with Huawei's upcoming flagship smartphone.