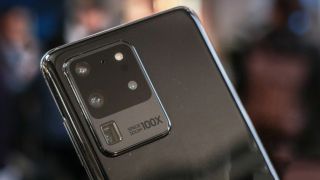 The Samsung Galaxy S20 Ultra has a 108MP sensor… but why stop there? (Image credit: Basil Kronfli / Digital Camera World)

We've had 150MP medium format cameras, 61MP mirrorless cameras and even a 108MP Xiaomi Mi Note 10 smartphone, but now it seems like all of this megapixel mania is going to be taken to the next level – with a 600MP Samsung smartphone sensor. Did anyone ask for this technology? Not necessarily, but Samsung isn't going to let a little thing like that stop it.

Samsung is known for pushing smartphone camera technology boundaries, having pioneered the industry's first 64MP smartphone sensor and releasing a 108MP smartphone in early 2020. Admittedly, these camera phones are very impressive pieces of technology, but is a 600MP sensor really the next step?

Samsung explains that our eyes "are said to match a resolution of around 500 megapixels. Compared to most DSLR cameras today that offer 40MP resolution and flagship smartphones with 12MP, we as an industry still have a long way to go to be able to match human perception capabilities."

However, while a high megapixel count is often held up as the gold standard for image quality, it's not actually that simple. As the Samsung release itself explains: "Simply putting as many pixels as possible together into a sensor might seem like the easy fix, but this would result in a massive image sensor…"

This means that the only way to increase the amount of megapixels for a set amount of space is to make them smaller, but this results in poor image quality due to the "smaller area that each pixels receives light information from". Samsung's solution to this problem is their 'Nonacell technology', which increases the amount of light absorption that pixels are capable of.

One of the biggest arguments against high megapixel cameras is the unwieldy file sizes. If you actually had 600MP image files, they would be absolutely huge. Not only would it require a massive amount of processing power, but your phone storage would be quickly clogged up by simply taking a couple of selfies and a few snaps of your dinner.

This would still be a massive file size for a smartphone, but what if Samsung was able to use something like 36-in-1 pixel binning, which would reduce 600 megapixels into a 16MP image. Not only would this be a perfectly serviceable file size, but the amount of detail this would offer would be incredible. Whether or not Samsung would be able to effectively counteract the difficulties with low light this sensor would inevitably encounter is probably the biggest question mark hanging over this concept.

While a 600MP smartphone sensor might initially sound a bit ridiculous, a combination of more advanced versions of Nonacell technology and pixel binning might actually produce some genuinely fascinating imaging technology. However, we'll likely have to wait a while before we see the fruits of Samsung's labor.

Best camera phone in 2020: which is the best smartphone for photography?
microSD card deals: best buys on memory cards for smartphones
Best iPhone tripods and supports in 2020: for night shots, vlogging and more