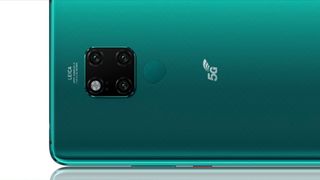 Huawei has announced that its first 5G camera phone, the Mate 20 X 5G, will launch in the UK next month, to coincide with the country's rollout of its inaugural 5G network coverage.

The Huawei Mate 20 X 5G actually made its debut in Switzerland at the start of the month, on the nation's Sunrise network. In the United Kingdom, the phone will launch on the major carriers: EE, O2, Three and Vodafone.

It was a big day for 5G announcements from the mobile giant, as the Huawei Mate X – the world's first and fastest foldable 5G camera phone – was also revealed by the company.

Both devices look set to jump straight to the top of our best camera phone list, thanks to the serious firepower they're packing in the photography stakes.

While the Mate X features a Leica Quad Camera array (including a time-of-flight camera), the 20X 5G boasts the same beefy trifecta of cameras as the Huawei Mate 20 Pro.

While the phone is largely similar to the vanilla Huawei Mate 20 X, it's received a few supercharged specs in addition to the obvious 5G oomph.

You're looking at the same Kirin 980 processor and 7.2-inch screen as before, but with upgraded RAM and storage of 8GB and 256GB respectively. The 4,200mAh battery is smaller than the predecessor's 5,000mAh affair, but the new cell supports an improved 40W supercharge (over the original's 22.5W).

Another new feature is support of the new M-Pen stylus, which works along similar lines to peripherals such as the Samsung Galaxy Note 9's S-Pen.

The Huawei Mate 20 X 5G will be available for pre-order in the UK from late May, going on sale in June in line with the rollout of the nation's 5G network. It's priced at a hefty £999 ($1,278) and comes in Emerald Green only.

The best camera phones in 2019
Huawei Mate X: the world's first and fastest foldable 5G camera phone
What is a time-of-flight camera?