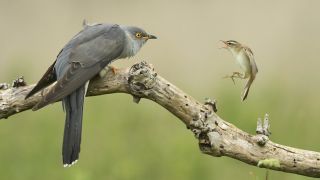 Keith Banister from Lancashire, England, has won  Living Planet Photography Competition, organized by The Society of International Nature and Wildlife Photographers. Keith has won a copy of DxO Nik Collection 2  software worth £125 plus one-year free membership to the Society (or one of its sister societies).

His stunning action image shows a sedge warbler facing up to the much larger cuckoo. The image was shot from a hide in York, England, in May last year. It was shot on Nikon D4 with a Nikon 300mm f/2.8 VR lens and a Nikon 1.7x teleconverter, using Aperture Priority exposure mode. The exposure was 1/800sec at f/6.3, ISO1000

On arrival we then had to walk about 2 miles through knee deep snow to reach the colony. We could hear the colony before we got there - the chicks were chirping and the adults trumpeting. We were not allowed to approach the penguins closely, but fortunately no-one had told them and they were soon coming over to investigate who/what we were. The image was shot with a Canon EOS 7D Mk II, with a handheld Canon 100-400mm f/4.5-5.6 S USM. The exposure was 1/1000sec at f/5, ISO100.

Image awarded 3rd place, Nick Dale from London, England. His shot shows a brown bear with shaggy fur about to catch a salmon in its mouth was taken at the top of Brooks Falls, Alaska. The fish is only a few inches away from its gaping jaws. Shot with a Nikon D800 with a 300mm lens. Exposure was 1/1600sec at f/9, ISO400.