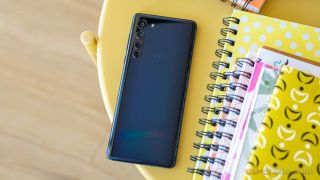 The Motorola Edge Lite will have a quadruple camera unit arranged in a vertical line down the left hand side of the back of the phone. The main camera will be 48MP and it'll be joined by a 16MP, an 8MP and a 5MP.

Meanwhile, as reported by GSMArena, on the front of the phone there's a dual hole-punch cutout in the top left corner that houses two cameras. One is an 8MP selfie camera and the other is a 2MP time-of-flight camera next to it.

The Motorola Edge Lite will have a 6.7" 1080x2520 panel with a 21:9 aspect ratio and a 90Hz refresh rate. It'll also have an in-display fingerprint sensor – although there's no word yet on whether it'll also feature Face Recognition like the original Edge and Edge Plus do.

For anyone wondering whether the Motorola Edge Lite will follow in the 5G-compatible footsteps of its predecessors, the Lite will indeed support 5G. It will also run Android 10 and will be offered in four different colors, including Prussian, Surfing Blue, Azury and Soft White.

In terms of pricing, the current rumor is that we'll see the entry level version of the Motorola Edge Lite being sold for €399 in Europe. However, we've yet to see any further information on what the official pricing will be in the US or UK.