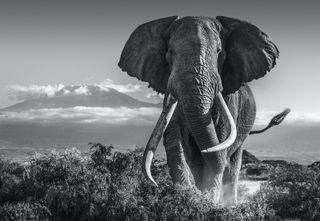 Fine art photographer, conservationist and author David Yarrow has officially been announced as a Super Stage speaker at The Photography Show at the Birmingham NEC from 14-17 March. David Yarrow has been a working photographer from a young age, shooting the World Cup final in Mexico City for The London Times in 1986 when he was just 20.

Other notable achievements from Yarrow include his book Wild Encounters, which featured a foreword written by HRH The Duke of Cambridge (Prince William). All of Yarrow's royalties from the book continue to be donated to Tusk, the leading British NGO that focuses on animal conservation in Africa.

Not only will attendees get the chance to see Yarrow speak, they'll also be able to check out manufacturer and exhibitor stands that will be packed full of the latest kit and equipment. With over 300 brands confirmed, there will be plenty of photographic excitement to be had.

However, alongside the manufacturer stands and the Super Stage will also be even more talks and demos. With the Photo Live stage, the Shutter Street stage, the Video Live stage and more, attendees are sure to find something juicy to sink their teeth into.

If you're interested in seeing David Yarrow speak at The Photography Show, you can buy your tickets here. Don't forget that Super Stage tickets are an extra nominal cost on top of your ticket, which you can book here.