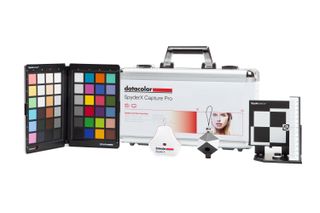 Datacolor has just released two new colour calibration kits based around its latest SpyderX monitor calibrator. What's more, until 14 July 2019, both kits can be had with an introductory offer of 20% off.

The new SpyderX Capture Pro is a comprehensive kit containing four products designed to calibrate each element of a photographic workflow.

The centrepiece is the impressive SpyderX Elite monitor calibrator (check out our full review) which offers advanced features like ambient light monitoring to adjust your monitor’s colour and brightness in response to the intensity and colour temperature of surrounding light. There’s also multi-monitor and projector support, but the biggest SpyderX improvement is its new lens-based sensor system, which helps boost calibration accuracy and speed. Datacolor claims it’s 4x faster than the previous Spyder5, and in our testing it was quicker still.

When it comes to judging accurate colour and contrast during a shoot, the next element of the Capture Pro kit comes into play. Place the SpyderCUBE in a test shot and it acts like a conventional white balance target, helping you set white balance, highlight and shadow levels. A Black Trap hole in the base defines absolute black, and the cube is topped off by a chromed ball that displays catchlights. The cube itself is easily pocketable, making it generally more convenient than a traditional grey card.

Datacolor’s SpyderCHECKR is tool of choice for more precise colour correction in post processing. With the slim 23 x 17cm device displayed in a test image, the accompanying software will detect its 48 colour patches and automatically adjust the shot to compensate for any colour casts. Lightroom or Adobe Camera Raw can then apply this colour profile to all images shot in the same conditions.

The final element in the Capture Pro kit addresses something often taken for granted: autofocus accuracy. Some lenses can front or back focus just enough to soften your focal point at large apertures. You can correct this by focusing wide open on the SpyderLENSCAL target. Its angled ruler reveals the actual point of focus, and how far it is from being accurate. This figure can be programmed into Canon cameras featuring AF Microadjustment, while AF Fine-Tune performs the same function in Nikon cameras. It wouldn’t be too tricky to construct a DIY version of this gadget, but Datacolor’s clever flat-pack design and robust build will likely stand up to long term use.

The second new SypderX kit is the SpyderX Studio. Like the Capture Pro kit, this also contains the SpyderX Elite monitor calibrator and Spyder Cube, but also adds Datacolor's Spyder Print printer profiling tool that makes quick work of ensuring the colour of your printed photos will match that of your on-screen images.