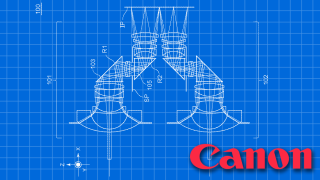 Is a Canon EOS R VR camera on the way? A design has been unearthed for what seems to be just such a thing: a full-frame mirrorless camera with "dual view anamorphic optics for VR" (virtual reality).

With the manufacturer significantly broadening its range of full-frame mirrorless cameras – with the Canon EOS R being joined by the lightweight Canon EOS RP, the astrophotography Canon EOS Ra, the 8K Canon EOS R5 and plenty of others being rumored – the idea of a Canon EOS R VR (Canon EOS vR?) actually makes some kind of sense.

The design was revealed by online outlet Hi Lows Note (by way of Canon Watch), in the form of Japanese patent P2020-42197A.

"Canon filed a patent of dual view anamorphic optic formulas for 35mm full-frame mirrorless cameras to record an image for VR," wrote the Japanese outlet, sharing images of the optical arrangement and image circles (below).

Of course, it's that key line – "35mm full-frame mirrorless cameras" – that indicates we're specifically talking about an EOS R camera here, since that is the only full-frame mirrorless system made by Canon (in other words, the patent doesn't describe the APS-C format of Canon's EOS M cameras).

What are the potential applications of such a camera? We've already seen plenty of 360 cameras that shoot VR using dual lenses, including the Insta360 Evo and Vuze XR. Then there are high end professional systems like the Matterport 3D VR, which provides virtual walkthroughs of buildings (like Google Maps for the home).

Quite how Canon envisions leveraging the technology is not yet known, but the manufacturer is definitely on a technology kick right now. On the back of the Canon EOS-1D X Mark III, which may be the most advanced camera we've ever seen, and the rule-redefining EOS R5, we can't wait to see what the company does with this fascinating tech.